A new way of 3D printing wood that takes advantage of warping could change how we build things in the future — an innovation that could potentially save us all time and money.

The challenge: Wood is made of fibers that absorb moisture like a sponge. If lumber isn’t dried properly, the wood will eventually shrink — bending or twisting in different directions depending on the orientation of the fibers.

That’s called “warping,” and it’s usually something we try to avoid — a warped door won’t close properly, and a warped floor will look wavy rather than flat.

The idea: A team from the Hebrew University of Jerusalem (HUJI) has now developed a new technique for 3D printing wood that turns warping into a tool rather than a nuisance.

By mixing superfine, filtered sawdust with binding agents, they created an ink that could be extruded from a 3D printer. By printing the ink at various speeds and along different pathways, they discovered that they could control the shape the wood warped into after drying.

Faster printing led to more directional shrinkage as the ink dried, while slower speeds left the wood fibers more randomly oriented, causing the wood to shrink in all directions evenly.

Looking ahead: The team is still experimenting with its technique for 3D printing wood, but in the future, it imagines manufacturers could print wooden objects, such as furniture, in flat layers and then ship them out in sealed containers.

These flat packages would potentially cost less to ship than bulky ones, and once opened, the ink would dry and the object would warp into its final shape — no assembly required.

The researchers think it might even be possible to repeatedly change the shape of objects 3D printed out of wood, to potentially breathe new life into an old piece of furniture, for example.

“We hope to show that under some conditions we can make these elements responsive — to humidity, for example — when we want to change the shape of an object again,” said co-principal investigator Eran Sharon. 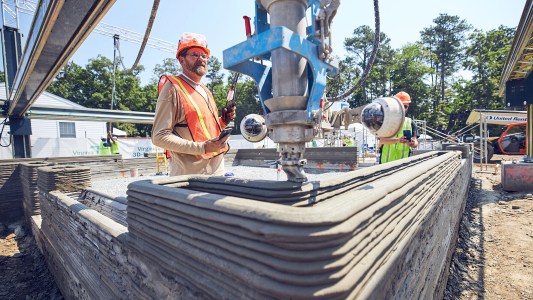 Construction company Alquist 3D plans to build 200 3D-printed houses over the next 5 years through Project Virginia.