More than five centuries ago, Italian genius Leonardo da Vinci inked blueprints for a human flying machine — now known as da Vinci’s helicopter. Among his various ideas, including an entire codex on flight, this concept is iconic. It clearly demonstrates a hovering device, 400 years before such craft began to appear.

To be sure, this is not the helicopter as we know it, powered by flat rotor blades acting like aircraft wings. The famous sketch describes a screw-like vertical blade spiraling about its central axis, a variation of the helix shape made famous by DNA molecules. How does it work?

Think of the action of a ship’s propeller upon water. The rotation of the blades pushes water away, and Isaac Newton’s third law describes the forward push upon the ship. Similarly, Leonardo’s aerial screw pushes air downward, propelling his craft upward. If the rotation of the screw can be accomplished at a rate fast enough to displace air of more mass than the ship, the craft rises in the air. The design is fundamentally sound.

What da Vinci lacked was the modern materials necessary to construct a lightweight and durable blade. He described the helical screw as being made of linen, with the pores stopped up by starch.

He also lacked the continuous motive power for such a machine. Men turning cranks could never dream of flying: they are far too heavy and too weak to produce enough power to lift themselves. The Andean Condor is a bird that grows to roughly the size of a man — four feet tall with a wingspan of ten feet or more. The condor works very hard to take off, and it only weighs about 25 pounds!

Cognizant of this limitation, da Vinci envisioned a spring, wound by the crank turners, building up and storing energy. That built-up energy could be released in a quick unwinding burst, spinning the screw rotor. But as far as we know, such a device was never built.

Could Leonardo’s invention in its original form ever lift off? It is hard to be sure, but several factors make it seem unlikely. First, the weak cloth screw would struggle to withstand air pressure as it spins. Second, the spring must be very powerful to rotate the screw, and it likely contains only enough potential energy for a modest number of rotations. Worse, some of these will be wasted on slow turns as the prop struggles to get up to speed. Third, the wooden prop shaft must be simultaneously strong enough to survive the torque of the screw pushing the air and reasonably light. And, the weight of the onboard men increases the struggle. Modern aircraft rely upon aluminum and hydrocarbon fuel to provide vastly more strength and energy per pound to achieve sustained flight with passengers.

In recent years, we have seen a revolution in tiny hovering aircraft. Diminutive motors and instruments enable featherweight drones to fly with modest amounts of electrical charge stored in chemical battery cells. The structural stresses are small enough to be withstood by lightweight metal or even plastic frames. Could this technology offer a platform for reinventing da Vinci’s screw?

In 2020, a team of engineering students undertook a very detailed study of the aerodynamics and other practical factors required for da Vinci’s helicopter to achieve liftoff. They found that the screw system, with numerous modifications, could be added to a modern drone that might indeed fly.

Tests of 3D-printed wing shapes and fluid mechanics simulations revealed that particular screw designs produced better upward thrust. The 15th century design shows a wide screw (large radius) with gradually increasing height (pitch). The study showed that a large ratio of pitch to radius produced the most thrust — that is, a relatively narrow screw with a rapidly rising blade. The change of radius with height (taper) can have a drastic effect. A screw that grows narrower from bottom to top is the best flyer, possibly because it can gain more thrust from a second turn of the screw, where a non-tapered screw loses thrust when built with multiple stacked turns.

Blade construction and materials can be modernized as well. The best blade material is a polymer sheet known as Dacron. Calculations minimized the number and position of carbon fiber horizontal spars upon which the blade is stretched and anchored. The vertical prop shaft to which the spars attach is made of aluminum, capable of sustaining the best compromise of tube diameter, tube width, strength, and ability to mount the spars.

The engineers also proposed wild modifications, like tiny tungsten weights suspended on carbon fiber arms, tuned to resonate with and absorb vibrational modes inherent in the screw. (Some of the more complex and expensive details of the design were sacrificed for efficiency in the team’s first handmade prototype.)

To perform a test flight, the engineers replaced the propellers of a drone with red plastic screw blades made according to their calculations based on da Vinci’s design. And did it work? Yes! (See video.)

One of the students working on the project said that he was “absolutely surprised” and that it “should be able to scale up fairly well.”

The Crimson Spin is a beautiful demonstration of how modern engineering and technology can team up with timeless inventive dreaming to produce a marvelous demonstration of human ingenuity. Still, don’t hold your breath for “Da Vinci Delivery Drones” or “Aerial Screw Airlines.” 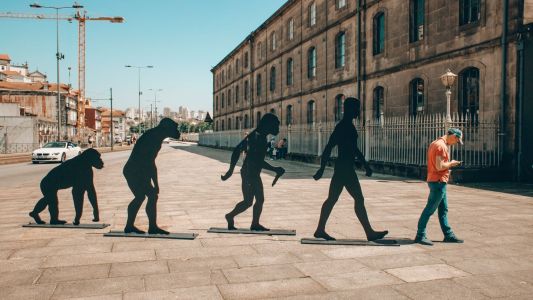 If humans don’t die out in a climate apocalypse or asteroid impact in the next 10,000 years, are we likely to evolve further?

Biology
How will humans change in the next 10,000 years?
Subscribe to Freethink for more great stories
Subscription Center
Sections
Video
Freethink
Subscribe
We focus on solutions: the smartest people, the biggest ideas, and the most ground breaking technology shaping our future.
Subscribe