Robots that look almost but not quite human tend to creep people out.

This phenomenon is known as “the uncanny valley,” and one of the reasons it exists is that, while engineers have managed to give robots lifelike limbs, skin, and even brains, they’ve yet to effectively replicate a human’s gaze — most robots have a dead-eyed stare.

If roboticists can figure out a way to overcome this problem, they might have an easier time getting people to embrace robots in their daily lives.

“The advantage of a robot that looks human-like is that people feel more comfortable with it being close to them, and it is easier to communicate with it,” robot cognition specialist Anouk van Maris told the Guardian in 2018.

Now, Disney researchers have taken a major step toward the goal of bridging the uncanny valley, creating a humanoid robot with a lifelike gaze and subtle movements that make it seem more human than its predecessors — if only someone would give it a face.

When people talk to each other, they don’t just stare motionlessly into one another’s eyes — they might look away occasionally, perhaps in response to a sound or just, you know, not to be weird.

Even when they are making direct eye contact, their eyes make tiny, rapid movements (known as saccades) as they take in another person’s entire face. Their heads will also move up and down slightly as they breathe.

These actions might be small, but their absence can contribute to the “something’s not right” feeling people get when interacting with a humanoid robot.

That’s why researchers at Walt Disney Imagineering teamed up with the University of Illinois, Urbana-Champaign, and Caltech to create a robot that could mimic them.

At first glance, no one would describe the humanoid robot they built as “lifelike” — it’s a stationary, limbless torso with a head that looks more like a skeletal Terminator than a character from Westworld. But it has a remarkable ability to mimic the way humans look when interacting with one another.

A sensor mounted on the robot’s chest lets it know when someone wants its attention, which prompts it to turn toward them. If there’s a sound elsewhere in the area, it’ll turn toward the noise momentarily, just like a human.

While engaged with a person, meanwhile, the humanoid robot exhibits the saccades and slight head bobs we’re used to seeing in other people. It even blinks realistically.

Currently, the human-like tics only serve to heighten its creepiness, but combined with skin and costume, Disney’s robot may yet cross the uncanny valley divide.

The company’s goal is to one day incorporate this technology into the animatronics at its theme parks, giving them an “illusion of life” that will entertain guests — but it’s not hard to imagine the tech making its way into the robots we see everyday, and not just on family vacations. 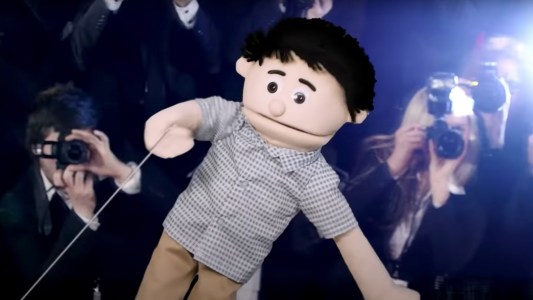 The creators of South Park have released a web show, Sassy Justice, that makes use of incredibly realistic deepfakes.