SpaceX’s Starlink internet service stopped an attack by Russia in Ukraine faster than the US government would have been able to, according to a Pentagon official, who suggested that the military could learn a few things about defending against electromagnetic warfare from SpaceX.

Electro… what? Electromagnetic energy is all around us. It travels through space in waves of light particles (photons), and the length of these waves varies.

At one end of the electromagnetic spectrum, you have the super-short waves (gamma waves), and at the other, the long ones (radio waves). The wavelengths we can see (visible light) are somewhere near the middle.

On April 20, Dave Tremper, director of electronic warfare for the Secretary of Defense, revealed that Russia had attempted such an attack on SpaceX’s Starlink network in Ukraine, which had distributed an estimated 5,000 terminals to help civilians and the military stay online.

Tremper, who was participating in a panel discussion at the C4ISRNET Conference, went on to say that Starlink was able to shut down the attack with incredible speed.

“The next day [after reports about the Russian jamming effort hit the media], Starlink had slung a line of code and fixed it,” Tremper said. “And suddenly that [attack] was not effective anymore. From [the] EW technologist’s perspective, that is fantastic … and how they did that was eye-watering to me.”

Why it matters: The fact that Starlink was able to protect a valuable mode of communication for Ukrainians is the good news. The bad news is that the US military probably wouldn’t have been able to do what the private company did.

“We need to be able to have Starlink’s agility.”

As Tremper told the C4ISRNET Conference audience, the military has a “significant timeline to make those types of corrections” — this is due to the amount of time it spends analyzing the attack, developing a response, and getting a contract to make the fix.

In other words, red tape.

The bottom line: The average person relies on the electromagnetic spectrum for work, information, and more, while the military’s reliance on it is increasing as new technologies make their way onto the battlefield.

That means electromagnetic warfare is likely to be a growing part of conflict — and in Starlink’s response to Russia’s attack, Tremper sees a model of what the US military should strive for in the future.

“There’s a really interesting case study to look at the agility that Starlink had in their ability to address that problem,” he said.

Update, April 28, 8:10 a.m ET: This article was updated to correct an error regarding the types of particles in electromagnetic waves. 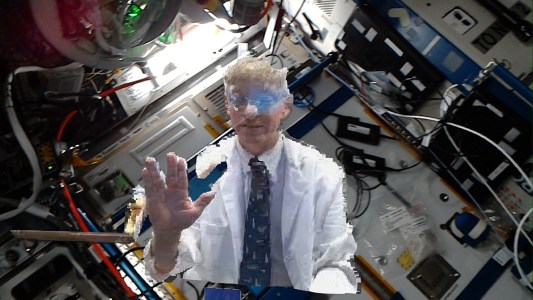 Holoportation tech developed by Microsoft virtually sent a flight surgeon to the ISS to talk to an astronaut.