Swiss tech company ABB has unveiled a new EV charging station that can rapidly power four electric vehicles at once — which could help make annoying wait times at stations a thing of the past.

The challenge: It typically takes less than five minutes to fill up a car’s tank at a gas station, and gas stations are everywhere in the U.S.

Depending on an EV’s battery and the type of EV charging station, it can take anywhere from 45 minutes to several hours to fully charge the car, and because charging stations are far less common than gas stations, drivers regularly have to wait for ports to open up.

“Electric vehicles have an indispensable role to play in reaching net-zero emissions worldwide.”

Why it matters: This has been a limiting factor in EV adoption. Only 3% of new cars sold in 2020 were EVs, and charging times and the hassle of charging are two of the top reasons people give for not buying one.

Addressing those charging concerns are essential to increasing the adoption of EVs.

“While they can’t do the job alone, electric vehicles have an indispensable role to play in reaching net-zero emissions worldwide,” Fatih Birol, executive director of the International Energy Agency, said in April.

It’s designed a lot like most gas pumps, but with four plugs instead of four nozzles  — according to ABB, no other station is explicitly designed to provide power to four EVs simultaneously.

When that’s happening, the station delivers power to each vehicle at a rate of 90 kW. If just one vehicle is plugged in, though, the rate increases to 360 kW — ABB says that makes it’s EV charging station the fastest EV charger in the world.

The cold water: ABB touts in its press release that the new EV charging station is theoretically capable of fully charging any EV battery in 15 minutes or less.

However, EV batteries aren’t like buckets you can simply dump electricity into. They have limits on the rate at which they can receive it, and no personal EV on the market is actually able to receive electricity at 360 kW (some commercial electric trucks and vans, however, could handle it).

The battery in Audi E-tron SUV, for example, is limited to 150 kW, meaning it would still need about 40 minutes — not 15 — to fully charge at one of ABB’s Terra 360 stations.

For the average driver, the station’s ability to charge four vehicles at 90 kW simultaneously is the more alluring feature, as it could help bring an end to wait times for plugs, and anything above 50 kW is still considered “fast.”

ABB expects its EV charging station to be available in Europe before the end of 2021, and in the U.S., Latin America, and other parts of the world in 2022. 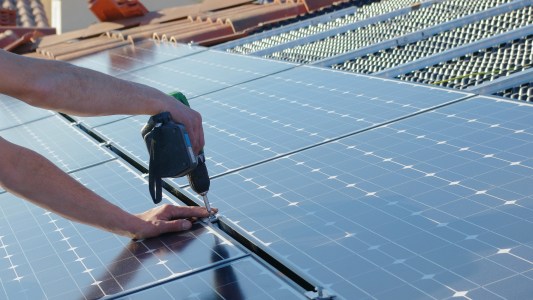