On October 6, 2016, 73 athletes from 25 countries will seek to answer one of the most interesting technology questions of the early 21st century: How close are we, exactly, to integrating humans with machines?

The first ever cyborg olympics, Cybathlon, is structured like a sporting event. It’ll conclude with a medal ceremony, and some people will go home losers. But beneath the competitive veneer is some of the most advanced bionic science in the world. The event’s organizers hope that by broadcasting this technology around the world (German speaking countries will be able to watch the entire eight-hour event live on television, and media companies from across the globe will have photographers and reporters in attendance) they can ease able-bodied viewers into the idea that cyborgs will soon walk among them.

“There’s some reluctance” about the next generation of assistive technology, says Robert Riener, who directs the Sensory-Motor Systems Lab at ETH Zurich, Switzerland’s leading research university. “People are careful and sometimes scared. We’re organizing the event to make people aware of these technologies and increase their acceptance.”

“People are careful and sometimes scared. We’re organizing the event to make people aware of these technologies and increase their acceptance.”

The Cybathlon coincides with an age of anxiety about the impact advanced technologies will have on the way we work and live. Europeans in particular are concerned about losing their jobs to robots. (Americans, interestingly enough, think robots will take other people’s jobs.)

The robotics debate is only going to intensify as the technology advances. That’s why Reiner and the Cybathlon organizers want to make the case now that advanced robotics will make life better for humans. To that end, every competitor in the event will be showcasing assistive technology across six disciplines:

Pilots for the BCI event will be fitted with headsets that use brain waves to detect wearer intention. They’ll use those headsets to play a videogame in which they guide an avatar through a 500 meter race course using one of three commands: jump, slide, and rotate. Every avatar (and thus every pilot) will finish the course even if they fail to master the BCI commands, but the more commands the pilots use to control their avatars, the faster the avatars will navigate the course.

According to the Cybathlon rule book, “Incorrectly chosen commands or or incorrectly timed commands yield a disadvantage, i.e. the avatar decelerates and loses time.” All participating BCI pilots must “have a complete or a severely affected incomplete loss of motor function at and below the neck level due to SCI, stroke, ALS or another lesion.” The BCI headsets can measure any type of brain activity so long as the headsets themselves don’t require skin-piercing electrodes to measure that activity. Pilots may not use eye-movement detection or muscle-detection hardware or software to control their avatars, and the Cybathlon committee will use webcam footage and referees to protect against disallowed technology.

Functional electrical stimulation technology uses electrical charges to stimulate muscle activity in paralyzed limbs, and it’s most commonly used to exercise the lower extremities. (It can cause something called autonomic dysreflexia when applied to the upper extremities, which is likely why the Cybathlon won’t host an upper extremity FES event.)

In this event, pilots will use FES to power recumbent bicycles around an oval course for five laps (totalling about 750 meters). Pilots need to have motor control above the waist in order to steer. The FES technology can power any muscles on the Pilot’s lower extremities, from glutes to calves, but doesn’t have to be applied to all of them. The bikes themselves cannot be powered.

FES pilots can adjust the level of stimulation throughout the event as a pacing technique, and unlike in the BCI event, they can use implants or surface electrodes. Their bikes can vary in design, so long as they’re able to turn within a certain radius, fit on the start ramp, and are completely manually powered. Pilots can use their hands to push their legs “to overcome pedalling dead points, but not to support on-going propulsion.”

In this race–arguably the most exciting of all the events–pilots will have eight minutes to do a series of tasks using their bionic upper extremity prostheses. The prostheses can be either active or passive, anchored using osseointegration or with a suction system or clasps.

The tasks themselves may seem relatively mundane: they range from moving puzzle pieces around a board and slicing bread, to moving a circle around a wire loop without touching the wire itself and hanging up clothes. But this is where cutting edge bionic prosthetics are going to blow away their 20th century predecessors.

The bionic arm event is also a reminder that this technology could mean a return to full functionality for people who have experienced amputations, strokes, and spinal cord injuries.

The Cybathlon will also feature a powered wheelchair event, a bionic leg event, and an exoskeleton event, all of which you can read about here.

As amazing as today’s bionic technology is, Riener says it’s simply not good enough. And he hopes the Cybathlon will spur more commercial interest and development.

“People think that these prostheses are more advanced than they actually are…Lab technology is working better, but it’s not robust enough.”

“People think that these prostheses are more advanced than they actually are. Most of them are passive. You can’t buy very many powered or motorized prostheses. Exoskeletons are bulky and heavy. The best products are very expensive, and can’t be used all day. Lab technology is working better, but it’s not robust enough.”

The Cybathlon could be for the bionics industry what E3 is for video games, or CES is for consumer electronics: A venue for showing off the latest technology to non-developers, and a place for the people who make that technology to swap ideas, borrow inspiration, and figure out how to make the next best thing.

And it’s also a place for people who are making their way back from injury to show the world that they’re capable of more than most of us realize.

“We have gold, silver, and bronze medals for the pilots,” Reiner says. “We also reward the teams of the pilots. There is a symbiosis between the pilots and the technology. The pilot needs the technology, but they are not the slaves, they are the masters.” 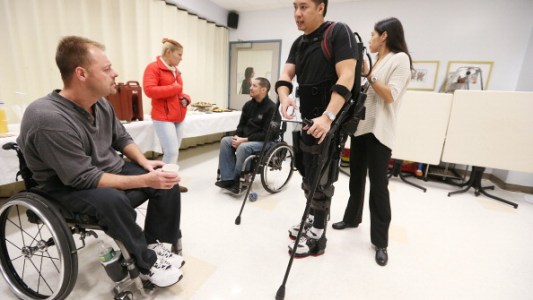 Robert is paralyzed from the chest down. But now a robotic exoskeleton is giving him what he calls “a second chance…

Bionics
Meet the paralyzed man who can walk again
Subscribe to Freethink for more great stories
Subscription Center
Sections
Video
Freethink
Subscribe
We focus on solutions: the smartest people, the biggest ideas, and the most ground breaking technology shaping our future.
Subscribe