British startup Bellwether Industries has shared footage of its futuristic flying car prototype’s first untethered test flights — bringing the aircraft one step closer to a city skyline near you.

The challenge: Experts predict the world’s population is going to skew more urban in the future, with about 70% of people living in cities in 2050 compared to 50% today.

If that’s the case, surface streets will likely become even more congested than they already are.

Bellwether’s goal is to have its flying car on the market by 2028.

The idea: Bellwether is one of many companies betting on flying cars as the solution to this problem — or at least part of the solution.

Technically, the vehicles they’re developing are called “electric vertical takeoff and landing (eVTOL) vehicles” because they’re battery powered and — you guessed it — take off and land vertically, like helicopters.

Because they don’t need a runway, eVTOLs could operate from rooftops, parking garages, or even driveways, carrying people from one part of a city to another without contributing to street traffic or emitting CO2 or harmful air pollutants.

A flying Antelope: Bellwether calls its flying car the “volar,” and it looks like what you’d get if the Batmobile mated with a flying saucer.

On January 12, the company shared a video of a half-scale prototype flying untethered for the first time.

This remote-controlled prototype — named “Antelope” — can only hit an altitude of 13 feet and a top speed of 25 miles per hour.

Bellwether says the full-scale volar will seat four or five people, with a top altitude of 3,000 feet, a top speed of 135 mph, and enough battery power for a one-hour flight at max payload.

The big picture: Bellwether’s goal is to have its flying car on the market by 2028, and these untethered test flights of a prototype put it closer to reaching that goal — but the company still has a lot of hurdles to surmount.

Even if the full-sized volar flies how the company wants it to, eVTOLs won’t be zipping across city skies until regulators can figure out how to certify them and how to manage the airspace the vehicles plan to traverse.

Flying car makers will also need to win over the public to bring their vision of urban transportation to fruition, and no doubt many people will be hesitant to risk their lives in the vehicles initially —  even if they do look cool and can cut down on commute times. 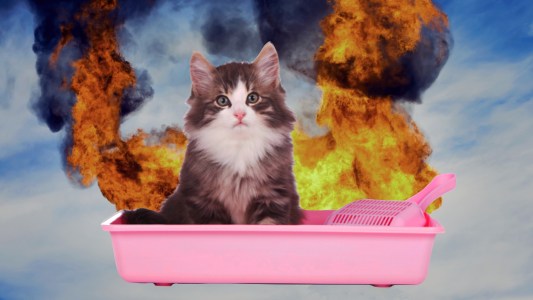 A new technology for reducing methane emissions in the atmosphere relies on zeolite, a cheap, abundant clay found in cat litter.