Athletes set new records and do amazing feats at every Olympics. But in the summer of 2024, it might be machines — not humans — pushing the limits.

In the next few months, France will begin testing electric air taxis at a hub outside of Paris, with plans to have dedicated flying taxi routes ready in time for the Olympic Games.

Plans for Paris: According to a statement released Thursday by Aeroports de Paris, two routes are planned to help spectators and athletes quickly get around the big city via a flying taxi. One route would connect Charles de Gaulle and Le Bourget airports, while the other would connect two neighborhoods southwest of the city.

In the next few months, France will begin testing electric air taxis at a hub outside of Paris, with plans to have dedicated flying taxi routes ready in time for the Olympic Games.

A total of thirty manufacturers were chosen to participate in the testing.

“The integration of technology is at the core of our vertiport design, development and operation,” Ankit Dass, CTO at Skyports, told Aviation Today.

Ready for takeoff: eVTOL (electric Vertical TakeOff and Landing) aircraft are quickly gaining traction as the next mode of transportation. The French station joins a growing number of proposed flying taxi bases across the world.

With demand from drones and flying taxis on the rise, Urban Air-Port has recently announced plans to establish 65 urban-airports worldwide. Urban-Air Port makes a small, modular eVTOL landing site — easier to deploy than a helipad — that can be both a charging station for electric aircraft and a passenger hub that integrates with other modes of transportation, reports trade publication eVTOL.com.

With demand from drones and flying taxis on the rise, Urban Air-Port has recently announced plans to establish 65 urban-airports worldwide.

Additionally, car manufacturer Hyundai plans to build its first location for a dedicated eVTOL landing hub in Coventry, England, and aims to introduce its own vehicle into service in 2028.

Flying cars go global: eVTOL companies like Archer, Joby, Vertical Aerospace, and Volocopter are all planning to begin commercial operations in 2024, in cities like Los Angeles, Singapore, Miami, and Paris.

One of the furthest along may be the California-based firm, Joby Aviation. They are working on an electric flying taxi with room for a pilot and four passengers. Their prototype completed a 154-mile flight on a single battery charge in July of last year.

The company is planning a fleet of more than 300 aircraft for Los Angeles alone. Earlier this month, they announced that they are taking the next steps toward a Federal Aviation Administration (FAA) aircraft conformity inspection, which they announced in a letter to their shareholders. They also described plans to launch a flight school to train eVTOL pilots, reports Flying magazine.

With plans to partner with Uber, we may be commuting by air as early as 2024, even if we’re not Olympic athletes. 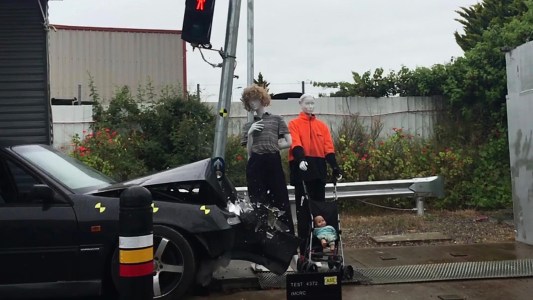 An impact-absorbing traffic light pole could save the lives of drivers and pedestrians, while also cutting repair and replacement costs.

Transportation
Falling traffic lights can kill. One tweak could save lives.
By Kristin Houser
Subscribe to Freethink for more great stories
Subscription Center
Sections
Video
Freethink
Subscribe
We focus on solutions: the smartest people, the biggest ideas, and the most ground breaking technology shaping our future.
Subscribe