A bank robbery is caught on a video surveillance system: the suspect — face obscured — walks calmly out of the bank, cash in his bag and a stunned teller in his wake. Law enforcement believes they have located the suspect, but with no way to recognize his face, they cannot be sure.

Before they risk a raid, the officers use the WiFi signals coming from inside the house, like radar, to “see” the suspect moving around. Using gait recognition technology, they match his specific movements to his known walk from the robbery footage and move in for the arrest.

This scenario is not too sci fi — although it is a bit scary; more on that later — and the tech is nearly ready for use. University of California, Santa Barbara researcher Yasamin Mostofi’s lab has already demonstrated it.

Radio frequency waves, including WiFi, bounce off of and are obscured by objects in their path, including people. These ripples can be used to identify if something or someone is in the way of the radio waves. Mostofi’s lab has already used this technique to accurately estimate the number of people in a room from outside of the room.

These disruptions in the waves are specific to the individuals’ size, shape, and, in this instance, motion.

Using WiFi signals and video footage, Mostofi’s lab achieved gait recognition with over 80% accuracy on a sample of eight subjects. Called the XModal-ID, the identification system recognized the gaits captured on WiFi through both plywood and drywall.

A “candidate video” provides the researchers with the gait information they need. People move in unique ways. These movements are captured by a computer program, which simulates how they would disrupt the WiFi signal. Using this template, the researchers then use WiFi transceivers to see if the disruptions match the template.

“Our proposed approach makes it possible to determine if the person behind the wall is the same as the one in video footage, using only a pair of off-the-shelf WiFi transceivers outside,” Mostofi tells UCSB’s The Current.

A Look at Gait Recognition in the Real World

There are potential uses of gait recognition beyond the obvious security applications. A system could turn the thermostat to a certain worker’s temperature preference when they walk into the room, or make true the dream of a personalized professional wrestling-style entrance song, which would be, quite frankly, awesome.

The work is possible because WiFi and radio frequency data is so richly tracked and measured, says Neal Patwari, who is not involved in Mostofi’s research. A professor at Washington University in St. Louis and Director of Research at Xandem Technology, Patwari researches using radio frequency (RF) signals for imaging and movement mapping, called RF tomography.

Society is drowning in various radio frequencies, which allows researchers like Mostofi and Patwari to develop surveillance systems and sensors. RF based systems present a couple of advantages to traditional surveillance systems, as well as some singularly dystopian possibilities.

They cover large areas of space and, as demonstrated by Mostofi, can “see through” obstructions, including walls. Some materials are trickier than others, Patwari says. Plywood and drywall are practically no hindrance, whereas concrete causes severe degradation and metal is impossible to see through at all. Since these systems, gait recognition included, can run on off-the-shelf technology, they do not require a large investment. And since they operate purely on radio frequencies, they are appropriate to use in situations where a video camera would not be (no more evading a security system by hiding in the bathroom).

It’s a double-edged sword, however. Those same advantages mean it’s possible for bad actors to use normal and commonplace devices to set up an RF surveillance system that the victim would be completely unaware of. As gait recognition technology improves, these secret sensors could even identify specific victims. It does not take much imagination to leap to spies and secret police, cloaks and daggers, jackboots and truncheons.

“That is definitely a good point,” Patwari says. “From the research perspective, one of the big challenges we have is to build next generation protocols and networks that can prevent this.”

While radio frequency jamming devices already exist, they are both illegal to operate in the U.S. and would disrupt other signals as well. Meaning no Hulu or Tinder, too (a sacrifice too great for some). 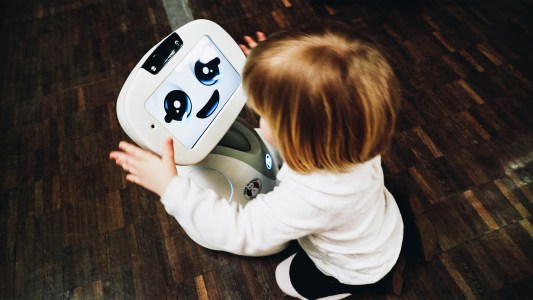 Meet BUDDY, an advanced robot designed with an expressive face and gentle voice. With human-like emotions and different moods, BUDDY has the ability to care for the elderly and his human companions.