Recent technology developed at Rice University is taking the idea that one man’s trash is another man’s treasure to its extreme. Banana peels, coffee grounds, single-use plastic containers, coal — all of these and more are being turned into one of the most valuable materials around: graphene. Chemist James Tour and his team have developed a rapid process that can transform bulk-quantities of junk into flakes of graphene.

“This is a big deal,” said Tour in a Rice University press release. “The world throws out 30 percent to 40 percent of all food, because it goes bad, and plastic waste is of worldwide concern. We’ve already proven that any solid carbon-based matter, including mixed plastic waste and rubber tires, can be turned into graphene.”

Graphene’s value is mainly due to its incredible strength and the wide variety of industrial applications it possesses. This material consists of a single layer of carbon atoms connected to one another by six chemical bonds, creating a lattice that resembles chicken wire.

Not only is graphene extremely useful in scientific experiments due to its high reactivity and strength, it can also be added to all sorts of other materials to improve their strength or to make them more lightweight, such as concrete or metals. It is the most conductive material, making it invaluable for use as a heat sink in, for instance, LEDs or smartphones. It could also be used in battery technology, in paints, in sensors, and many more — there are quite literally too many applications for this material to cover in this article alone.

Despite its high utility, graphene isn’t a part of our everyday lives yet. Part of the reason why is because of its prohibitive cost. Graphene is difficult to produce in bulk, with “the present commercial price of graphene being $67,000 to $200,000 per ton,” said Tour. Common techniques include exfoliation, in which sheets of graphene are stripped away from graphite, or chemical vapor deposition, in which methane (CH4) is vaporized in the presence of a copper substrate that grabs the methane’s carbon atoms, arranging them as graphene.

The new technique, called flash Joule heating, is far simpler, cheaper, and doesn’t rely on any hazardous solvents or chemical additives. Simply put, a carbon-based material is exposed to a 2,760°C (5,000°F) heat for just 10 milliseconds. This breaks every chemical bond in the input material. All atoms aside from carbon turn into gas, which escape in this proof-of-concept device but could be captured in industrial applications. The carbon, however, reassembles itself as flakes of graphene.

What’s more, this technique produces so-called turbostatic graphene. Other processes produce what’s known as A-B stacked graphene, in which half of the atoms in one sheet of graphene lie over the atoms of another sheet of graphene. This results in a tighter bond between the two sheets, making them harder to separate. Turbostatic graphene has no such order between sheets, so they’re easier to remove from one another.

The most obvious use case for what the researchers have termed “flash graphene” is to use these graphene flakes as a component in concrete. “By strengthening concrete with graphene,” said Tour, “we could use less concrete for building, and it would cost less to manufacture and less to transport. Essentially, we’re trapping greenhouse gases like carbon dioxide and methane that waste food would have emitted in landfills. We are converting those carbons into graphene and adding that graphene to concrete, thereby lowering the amount of carbon dioxide generated in concrete manufacture. It’s a win-win environmental scenario using graphene.”

Concrete is a major application for this material, one that would both be economically and environmentally sound, but many others exist too. As this method and others for producing graphene in bulk mature, we can hope to see a future with increasingly stronger, more lightweight, more advanced, and less environmentally destructive materials and technologies. 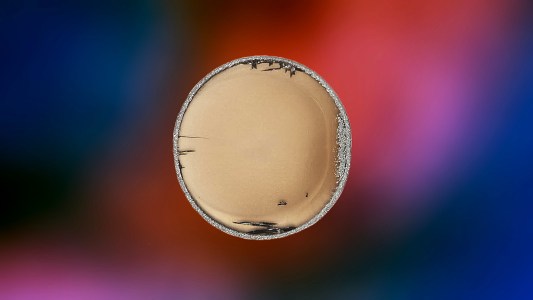 Inventions
A new kind of diamond will hold a billion Blu-Ray’s worth of data
Subscribe to Freethink for more great stories
Subscription Center
Sections
Video
Freethink
Subscribe
We focus on solutions: the smartest people, the biggest ideas, and the most ground breaking technology shaping our future.
Subscribe