The future of quantum memory is taking shape in Japan, where researchers have grown diamond wafers that could store the equivalent to one billion Blu-Ray discs worth of quantum data.

Why it matters: Quantum computers use the strange physics of the subatomic world to process calculations far more quickly than classical computers can.

The technology is still in the early stages of development, but if it can overcome the practical hurdles, it could lead to breakthroughs in everything from healthcare to astronomy.

The challenge: Just like classical computers have places where they can store data, quantum ones need their own memory devices.

Diamond is one of the most promising materials for quantum memory because it contains defects known as “nitrogen-vacancy centers” that can store quantum data at room temperature.

The diamond wafers used for quantum memory won’t work properly if their nitrogen content is greater than three parts per billion (ppb), though, and so far, the largest wafers that meet that purity standard are just 4 millimeters in diameter — too small for practical applications.

They call them Kenzan Diamonds, and the key was allowing the diamond to grow on a stepped substrate, rather than the traditional flat substrate. This reduces stress on the diamond, letting the wafer grow larger without cracking.

This approach also reduces the amount of nitrogen gas needed to accelerate the diamond’s growth, leading to higher purity.

Looking ahead: In May, the researchers will present a paper on their diamond wafers at the CS MANTECH conference in California. They’re now working to double the wafers’ diameter and develop peripheral technology, including polishing tech.

Adamant Namiki’s goal is to have the diamond wafers ready for commercial release in 2023, at which point they could be used by researchers to dramatically increase the quantum memory of in-development computers. 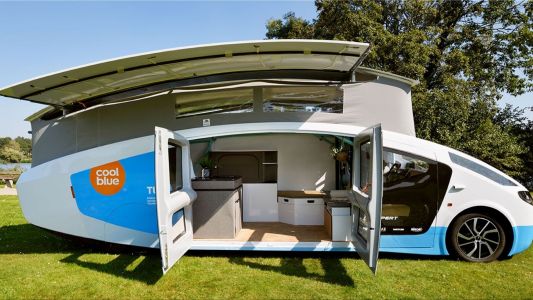 Students from the Technical University of Eindhoven in the Netherlands have created a solar-powered motorhome, shaped like a huge teardrop.

Transportation
This solar-powered motorhome was designed by students
Subscribe to Freethink for more great stories
Subscription Center
Sections
Video
Freethink
Subscribe
We focus on solutions: the smartest people, the biggest ideas, and the most ground breaking technology shaping our future.
Subscribe