We do have TVs that market a growing range of technologies: LCD, LED, mini-LED, OLED, QLED, QD-OLED, and so forth. Clearly, we are good at inventing tech jargon, but these are all incremental improvements on where we started more than 90 years ago with glass tubes.

A true holographic TV with a high-quality picture would be a new and impressive invention. How would it work, and should you expect to have one in your living room one day? Moreover, would you actually want one?

A photograph or a moving picture on a display is the “projection” of a real three-dimensional scene onto a 2D plane.

We know they’re flat because they present only one perspective to our eye. Our imagination then fills in the missing depth and perspective that cleave the image from reality. A major facet of the art of photography is choosing the single most meaningful flattened 2D angle to represent a scene.

A hologram is something more than this. It’s an illuminated image of an object that appears to be sitting in front of you.

It shifts perspective when you look at it, as the real 3D object would. If the image contains multiple objects, you can shift your view to see past objects in the foreground that obstruct those in the background. The hologram possesses apparent depth.

A hologram is created by the interference of light waves. Light from a single source is split into two beams. The first beam is used to illuminate the object to be photographed. The second beam is routed around the object, without interaction. The light reflected from the object and the untouched light are then combined within the holographic film media.

The waves in each beam interfere constructively (bright area) or destructively (dark area), exposing the film in a complex pattern.

This pattern is indecipherable to human eyes. However, if the film media is illuminated properly, the interference between the illumination and the hologram pattern within the film will produce new waves. These new waves recreate the pattern reflected by the original object in a range of directions, allowing you to change your perspective and perceive depth.

Upgrading the technology from a single static image hologram to create a moving hologram display is a grand engineering challenge, but a recent paper, published in the Nature journal Light: Science & Applications, describes a small step toward tackling it.

A hologram in a video display must be able to rapidly modulate (alter form on command) to produce the illusion of a moving picture. This requires that single exposure holographic film be replaced by a digitally controlled medium whose engrained pattern can be modulated dozens of times per second.

Each hologram-producing image exists in the medium just long enough for a red, then a green, then a blue laser to sweep across it. Optics relay the laser light to the front of the display unit, where you can see it. As soon as this one “frame” is complete, the hologram medium is reconfigured for the next frame.

A hologram in a video display must be able to rapidly modulate to produce the illusion of a moving picture.

An input broadcast, cable, or stream drives the modulation of the holographic medium. In principle this could be done via some sort of live broadcast feed from a holographic camera. In practice, the researchers create the hologram video by conducting layer-by-layer optical scans of an object (or even simulated scans of a 3D computer model) and then measuring reflectance at each layer.

This process creates a recognizable hologram, but with significant loss of detail. You can see that the holograms in the paper are somewhat fuzzy and blurry — a bit like the Emperor’s holograms in Star Wars. The image quality appears to be noticeably worse than an old-fashioned analog tube television set.

But the visually stunning aspect of a holographic display is its ability to realistically project the clear image of an object with depth and perspective from a range of angles. To accomplish this, the holographic projection must be large in extent, with high resolution. This means either one huge hologram or a tiled set of smaller holographic sub-units — each like a pixel on a TV.

The researchers pursue the second angle.

To stack sub-units together like bricks into one seamless screen, the entire thing must fit in a box of the same width as the hologram it produces. This allows the brick to be stacked next to each other to form a seamless edge (no mortar, if you will).

This is analogous to the matrix of pixels that form a TV or computer display. The holobrick accomplishes this using a clever set of complex scanning mirrors and periscoping optics to create the hologram and relay a magnified version to the front of the display. The paper describes two seamlessly joined bricks, making one screen.

How much does it really matter?

While this is an impressive piece of technology, there are several reasons why you shouldn’t expect to see a holographic TV any time soon. In practice, the apparatus is not packaged into a practical unit. It’s a hand-built optical system occupying a laboratory optics bench several feet across. At this point, the size, cost, and complexity are far too great for commercial application.

One stunning example of a sort-of-3D display plans to ship soon. It appears to use stacked 2D LCD displays, cleverly arranged behind gratings that reflect a different display at different viewing angles, to mimic the all-angle viewability of a hologram.

This is a slightly discontinuous effect that suffers from distortion and a certain eeriness, but it’s probably incredible to view in person.

An entirely different possible solution is this prototype display that drives reflective beads through space with ultrasonic waves. (The tricks that make these 3D-like and truly 3D displays work are fascinating topics for another time.)

The bigger issue is that audiences don’t seem to like 3D movies that much. Each time a new 3D movie technology rolls out, it sparks a small fad for a few years and then disappears. It may be that we like the safe remove of a 2D screen. A partially lifelike 3D image can be creepy, uncanny, unsettling, confusing, and exhausting. A properly designed 2D screen produces a lifelike flattened image, allowing our imaginations to do the rest. We fill in or ignore depth, perspective, and details in the way that suits us, on our terms.

This public indifference is exemplified by the history of 2D hologram still images. These have been commercially available for decades. They’re quietly common. Your wallet probably contains at least one, the shiny image of a bird on your credit card. National Geographic — back when it printed the best photography in the world — periodically published hologram images on the cover of its paper magazines. Still, they haven’t supplanted or even challenged traditional 2D photography.

Perhaps when we finally have holographic TVs, they won’t catch on either. Do you know anyone who watches their living room TV with 3D glasses? Maybe Holo-TV will be another novelty movie fad that sells expensive boxes for a few years then fades away. It sounds like the future, but the future is notoriously difficult to predict.

Entertainment
Avatar 2: How much has CGI really improved since 2009?
Some critics say CGI has actually gotten worse. Here’s why it’s not so simple.
Up Next 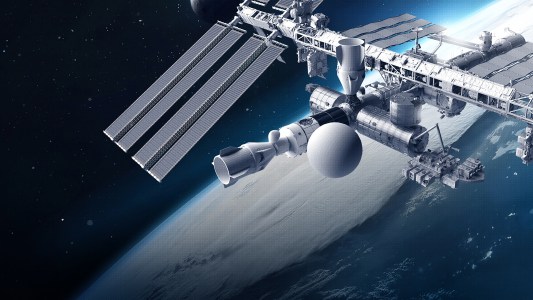 A new space module designed for the recording and livestreaming of movies and sporting events is expected to attach to the ISS in 2024.

Aerospace
A space film studio is launching into orbit in 2024
Subscribe to Freethink for more great stories
Subscription Center
Sections
Video
Freethink
Subscribe
We focus on solutions: the smartest people, the biggest ideas, and the most ground breaking technology shaping our future.
Subscribe