The co-producers of an upcoming Tom Cruise film have announced plans to (literally) launch a new production studio — in space.

A new era: The high cost of space travel has traditionally meant that only governments and militaries could afford to go to space. Thanks to the advent of reusable rockets and other innovations, that cost is dropping significantly.

As a result, the private space sector is booming, with dozens of space-focused startups and a huge increase in space tourism — 20 private citizens ventured off world in 2021, compared to just 7 in the decades prior.

Off-world entertainment: In 2020, NASA confirmed that it was working with actor Tom Cruise to film an action movie aboard the International Space Station (ISS).

“SEE-1 will provide a unique and accessible home for boundless entertainment possibilities.”

The studio will be attached to a new module headed to the ISS.

“[SEE-1] will provide a unique, and accessible home for boundless entertainment possibilities in a venue packed with innovative infrastructure, which will unleash a new world of creativity,” the two said in a press release.

The plan is for it to be a 20-foot-wide inflatable space module suitable for recording or livestreaming films, TV shows, musical performances, and sporting events in near-zero gravity.

SEE-1 is expected to launch by December 2024. In orbit, it will connect to Axiom Station, a space module that Axiom is building and launching in September 2024 as part of a $140 million NASA contract.

Axiom Station is expected to remain attached to the ISS until the space station retires, at which point the space module will detach and become the first commercial space station.

“Adding a dedicated entertainment venue to Axiom Station’s commercial capabilities in the form of SEE-1 will expand the station’s utility as a platform for a global user base and highlight the range of opportunities the new space economy offers,” Axiom CEO Michael Suffredini said.

The big picture: So far, most of the action we’ve seen in the private space economy has centered on transporting tourists, manufacturing products, or launching satellites.

SEE-1 is the first really major media venture, and if all goes according to plan with the launch of the space module, it’ll give creatives an entirely new medium to explore — and potentially pump a lot of money into the space economy.

“SEE-1 will provide not only the first, but also the supreme quality space structure enabling the expansion of the $2 trillion global entertainment industry into low-Earth orbit,” the Lesnevskys said. 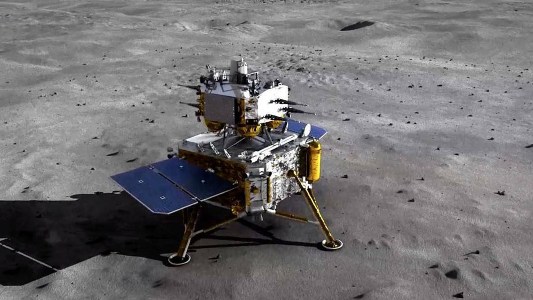 The first onsite evidence of water on the moon suggests that subterranean lunar rock contains larger stores than can be found on the surface.