Go big or go home. This Alabama-based start-up just unveiled the biggest drone in the world — and it looks sublime. The massive drone, called the Ravn X, is designed to launch small satellites into orbit while airborne.

If You’re Not The First, Be The Biggest

Aevum — the space startup — has worked mainly in the background, until yesterday when they unveiled their gigantic autonomous drone.

They built the high-altitude aircraft and launch vehicle to ferry satellites to orbit and improve space access — similar goals to space-tech leaders like Virgin Orbit, Rocket Lab, and SpaceX. But if you want to get ahead of the competition and can’t be the first, why not be the biggest?

Ravn X has a wingspan of 60 feet and length of 80 feet, occupying about 8,000 square feet in the hangar. It can take off and land on just one mile of runway and uses the same jet fuel as a regular airplane. And, by launching like an airplane, instead of like a vertical take-off and landing (VTOL) drone, the craft is more capable of handling challenging weather conditions.

At first glance, the Ravn X seems similar to Virgin Orbit’s Stratolaunch because of its size (Stratolaunch is the world’s largest plane) and ability to launch payloads while airborne.

But there is one key difference — Ravn X doesn’t require a human pilot, allowing the spacecraft to push the limits without risking lives. Because it can fly sans-pilot, the drone will be able to pull off considerably higher g-loads and steep ascents, reports Ars Technica.

“Aevum is completely reimagining access to space,” said Jay Skylus, founder and CEO of Aevum. “The current definition of rocket science doesn’t work for us. With Aevum, everyone will be able to say, ‘It is rocket science and I can do it.'”

Skylus is a trained physicist who used to work with NASA before launching Aevum in 2016 — only four years ago. But the idea has been floating in his head much longer.

According to the  Aveum website, he began thinking about communication challenges in remote locations in 2005 when he read a story of U.S. soldiers killed in action in Afghanistan. A year later, he resolved to “break the digital divide by making space accessible for everyone.”

Skylus went right to work — building a rocket engine and funding his work by selling car parts online. He made the first Ravn X launch vehicle concept in 2011.

Skylus may have started small, but already, the company has secured contracts for the next decade, worth over $1 billion. Ravn X’s first mission will be with the Space Force’s (a department of the Air Force) ASLON-45 mission. 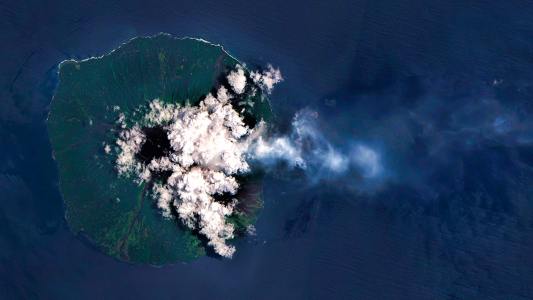 The ratio of sulphur to carbon dioxide being released can be an indicator of imminent volcanic eruptions. Researchers are using drones to gather that data.

Drones
Dropping drones into volcanoes can help us predict eruptions
Subscribe to Freethink for more great stories
Subscription Center
Challenges
Video
Freethink
Subscribe
We focus on solutions: the smartest people, the biggest ideas, and the most ground breaking technology shaping our future.
Subscribe