In February 2022, Texas-based startup Axiom Space will launch the first fully private mission to the International Space Station (ISS) — a milestone for commercial spaceflight. While onboard, the astronauts will conduct microgravity research that could help future astronauts, the first step in Axiom’s quest to create the world’s first commercial space station.

The challenge: The microgravity environment aboard the ISS allows scientists to conduct experiments that wouldn’t be possible on Earth.

However, there isn’t nearly enough time for government scientists to conduct all of the potential microgravity research, nor is there enough room aboard the ISS for all the potential experiments.

The idea: Axiom Space is working to expand the amount of research that can be done in microgravity by creating the world’s first commercial space station, a place where anyone could buy the time and space needed for their experiments.

“Humanity has only scratched the surface of low-Earth orbit’s potential for breakthrough innovation,” Michael Suffredini, the startup’s president and CEO, said in a press release, “and Axiom was founded to push that envelope.”

In 2024, Axiom plans to launch the first module. Initially, it will attach to the ISS to expand the amount of room available for astronauts and experiments, and when the ISS is retired, it’ll separate to become its own space station.

Before that happens, though, Axiom is sending groups of private astronauts to the ISS to conduct experiments.

“We’re doing these series of missions in order to do a couple of things,” Christian Maender, in-space manufacturing and research director at Axiom, said during a November conference. “First, to develop markets, but also to do pathfinder work towards what is eventually our Axiom station.”

What’s new: The first of those missions, Axiom Mission 1 (Ax-1), is set to launch in February 2022 with four crew members — one is an Axiom employee (he’ll serve as commander), and the other three are men paying $55 million each to spend about a week aboard the ISS.

During their time in space, the crew will conduct more than 100 hours of microgravity experiments on behalf of a number of universities, startups, and institutes.

“We applaud the Ax-1 crew’s commitment to advancing scientific inquiry and kicking off this civilizational leap.”

Those include studies related to climate change, STEM education, and the ​​environmental health of the Great Lakes. Several microgravity experiments focused on the impact of space travel on the human body are also planned.

“We applaud the Ax-1 crew’s commitment to advancing scientific inquiry and kicking off this civilizational leap,” Suffredini said.

“We’re confident this mission will become not just a monumental moment in space travel, but the true beginning of making space’s potential for meaningful discovery available to private citizens and organizations for the first time,” he continued. 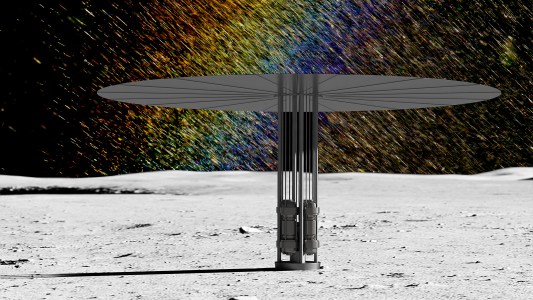 NASA and the Department of Energy are asking U.S. companies for help putting a nuclear reactor on the moon by 2031.

Aerospace
NASA plans to put a nuclear reactor on the moon by 2031
Subscribe to Freethink for more great stories
Subscription Center
Sections
Video
Freethink
Subscribe
We focus on solutions: the smartest people, the biggest ideas, and the most ground breaking technology shaping our future.
Subscribe