China’s Chang’e 5 lander has provided the first onsite evidence of water on the moon — and given us new clues about where to find more of it.

The background: When astronauts first returned from the moon in 1969, NASA thought it was completely dry. But by 2009, three spacecraft had produced “unambiguous” evidence of either water (H2O) or hydroxyl (OH) on the moon.

In 2018, NASA confirmed the presence of water ice at the moon’s frigid poles. Two years later, it announced the discovery of some water in the sunlit areas humans are more likely to visit.

Why it matters: If the moon does contain water, it opens up a world of possibilities for space exploration.

“Water is a valuable resource, for both scientific purposes and for use by our explorers,” Jacob Bleacher, chief exploration scientist at NASA, said in 2020. “If we can use the resources at the moon, then we can carry less water and more equipment to help enable new scientific discoveries.”

What’s new: Until now, all of our evidence of water on the moon has been collected remotely — it’s either been based on observations from orbiting spacecraft or discovered in samples of moon rocks brought back to Earth.

Now, the Chang’e 5 lunar lander has collected the first onsite evidence of water on the moon.

“It’s like a ‘field trip’ out on the Moon, the first opportunity to detect signs of water at close range and high resolution on the lunar surface,” Lin Honglei, lead author of an accompanying study, said, according to the South China Morning Post.

“Water is a valuable resource, for both scientific purposes and for use by our explorers.”

The details: The Chang’e 5 lander’s discovery was made possible by an instrument called a spectrometer, which measures the quantities of light reflecting off objects. Based on those reflections, scientists can determine what the target is made of.

Chang’e 5’s spectrometer was used to analyze both surface soil and a nearby lunar rock. Based on the data, the soil contained just 120 parts per million (ppm) of water, but the rock had locked up 180 ppm of water.

Scientists suspect that the lunar rock was dislodged from the moon’s interior when Chang’e 5 landed, which suggests that there’s more water below ground on the moon than we can detect on the surface.

Looking ahead: We could have more onsite evidence of water on the moon in the near future.

NASA plans to send its Polar Resources Ice-Mining Experiment-1 (PRIME-1) to the moon before the end of 2022. That experiment will use a drill to extract soil from three feet beneath the moon’s surface so that a spectrometer can then analyze it.

Not only could this improve our understanding of how much water might be on the moon, it could also help with future efforts to mine it for use as fuel, drinking water, and more. 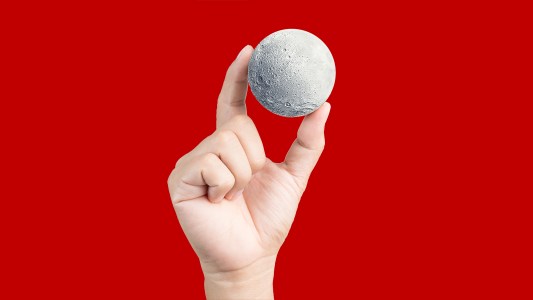 China’s artificial moon, which uses magnets to mimic lunar gravity, could help with the creation of future moon colonies.