NASA has long suspected that there’s water on the moon, but only in frigid, difficult-to-navigate craters near its poles.

The theory was that water would have a better chance of remaining stable in those perpetually shadowed craters than the parts of the moon exposed to sunlight, which can experience wild temperature fluctuations.

Now, two new studies are reporting the best evidence to date that there is actually water on the moon — and not just in these hard-to-reach areas.

If NASA can confirm these studies and figure out how to extract the water (still a big “if”), it could have a dramatic impact on future plans for lunar — and deep space — exploration.

Water on the Moon

Scientists first spotted the chemical evidence of water on the moon in the 1990s.

However, they weren’t sure if what they were detecting was molecular water (H2O) or its chemical relative, hydroxyl (HO). The former, we can drink; the latter is essentially drain cleaner.

Now, NASA researchers have put that question to rest with a new study in Nature Astronomy.

Using instruments aboard the Stratospheric Observatory for Infrared Astronomy (SOFIA) — a modified Boeing 747 equipped with a massive telescope — they picked up the light signature unique to molecular water.

“This is the first time we can say with certainty that the water molecule is present on the lunar surface,” lead author Casey Honniball told MIT Technology Review.

Not only that, but the water they discovered was in the sunlit Clavius Crater — not one in perpetual darkness.

“We didn’t know that water could survive on the surface of the moon when it is illuminated,” Honniball told the Verge.

The researchers suspect that this water is able to survive because it’s encased in glass beads or perhaps shielded from the sunlight by grains of soil.

Water Across the Lunar Surface

A team led by University of Colorado, Boulder, published its own study of water on the moon the same day as the SOFIA researchers.

Using images collected by NASA’s Lunar Reconnaissance Orbiter, a tiny spacecraft that has been circling the moon since 2009, they determined that 15,000 square miles of the lunar surface could be permanently shadowed.

If we’re right, water is going to be more accessible for drinking and rocket fuel.

Rather than just being in huge craters, some of the areas in perpetual shadow are just a centimeter wide, and the researchers suspect that their lack of direct sun exposure means they might contain water, too.

“Instead of just a handful of large cold traps within ‘craters with names,’ there’s a whole galaxy of tiny cold traps spread out over the whole polar region,” lead author Paul Hayne told MIT Technology Review.

These reserves would be far easier for astronauts to access, Hayne added, saving them from having to venture down into the moon’s large, frigid craters, which are among the coldest known places in the solar system.

“If we’re right, water is going to be more accessible for drinking water, for rocket fuel, everything that NASA needs water for,” he said in a press release.

There’s still much research to be done before any astronauts are mining and drinking water from the lunar surface, though.

For one, the CU Boulder team’s observation is based on images and computer models — no one has actually found water everywhere they suspect it might be yet.

As for the SOFIA research, we still need to figure out how hard it would be to extract water from the sunlit areas of the moon — it could be extra tricky if the molecules are actually encased in glass.

“The method to extract that water would be to melt the glass, so that the water can be released,” Honniball told the Verge. “This is a consuming process, compared to some other methods.”

Still, if it turns out that water on the moon is more abundant and accessible than previously thought, it could prove to be a boon for both our lunar missions and efforts to explore other parts of the solar system.

“Water is a valuable resource, for both scientific purposes and for use by our explorers,” Jacob Bleacher, chief exploration scientist at NASA, said in a news release. “If we can use the resources at the moon, then we can carry less water and more equipment to help enable new scientific discoveries.” 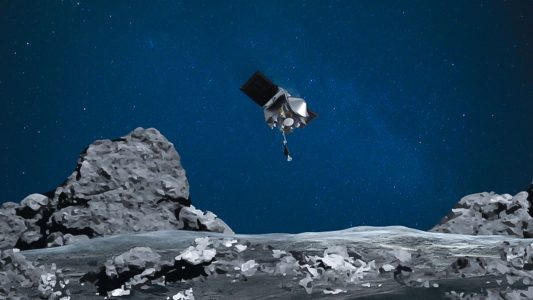 NASA has collected samples from the asteroid Bennu that could yield insights into everything from the origin of life to avoiding an asteroid impact on Earth.

Asteroids
Why NASA just landed a spacecraft on the asteroid Bennu
Subscribe to Freethink for more great stories
Subscription Center
Challenges
Video
Freethink
Subscribe
We focus on solutions: the smartest people, the biggest ideas, and the most ground breaking technology shaping our future.
Subscribe