On December 2, NASA announced that it was awarding three private companies contracts worth more than $400 million to develop commercial space stations that could replace the soon-to-retire ISS — ensuring NASA’s presence in space continues uninterrupted.

The challenge: The ISS has provided NASA researchers with steady access to microgravity for two decades now. This has allowed them to conduct experiments that would be impossible on Earth, including ones that will help us send astronauts on longer missions and deeper into space.

However, the ISS is starting to show signs of aging, and it’s currently scheduled to retire in 2024 (though most expect it’ll get an extension through 2030). If NASA doesn’t have a replacement ready by the time the ISS retires, this research will grind to a halt.

NASA spends $4 billion on the ISS every year, and it still has to share the space station.

Going commercial: Building and operating the ISS hasn’t been cheap.

In its first 20 years, the station cost partner countries over $150 billion in total. NASA alone spends about $4 billion on it every year, and it still has to share the ISS with its international partners.

NASA wants a private American company to build the ISS’s replacement so it doesn’t have to spend all that money operating and maintaining the space station — it can just pay a fee to use what it needs.

The bigger picture: Commercial space stations would make it easier for private companies and citizens to access space, too.

NASA anticipates needing at least two astronauts in space at all times to meet its near-future research needs, but any additional space on board a new space station could be sold to others who want to conduct experiments or simply enjoy a vacation in microgravity.

“After the space station retires and we are utilizing these commercial destinations for services, the hope is that we have this robust [low-Earth orbit] economy at that point,” Misty Snopkowski, NASA’s program executive for the Commercial LEO Development program, told Inverse.

“Where there are numerous people that are able to access space — they come there to work, they could play, they could live — and NASA is just one of those many customers that are participating in these destinations,” she continued.

Nanoracks is receiving the biggest investment — $160 million — for its Starlab proposal. That space station’s main structure will be an inflatable module with room for four astronauts.

Blue Origin has received $130 million to develop Orbital Reef, a “mixed-use space business park” capable of supporting up to 10 people.

Northrop Grumman, meanwhile, is getting $125.6 million to develop a space station that would support four people initially but later scale up to eight.

Looking ahead: This funding will support development of the space stations through 2025 — though, of course, the stations themselves will cost billions to ultimately build and deploy.

A second phase of the program will launch in 2025, during which NASA will work to certify one (or more) of the space stations for use by its astronauts and then purchase time aboard it.

The hope is for that phase to wrap between 2028 and 2030, Snopkowski said — just in time for the ISS’s retirement. 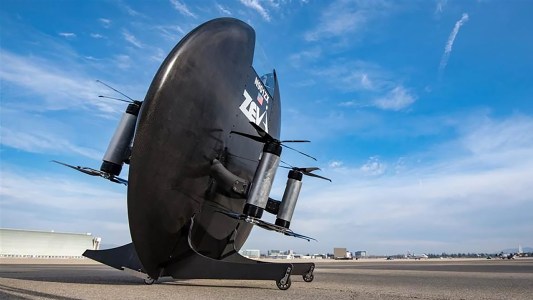 Startup ZEVA Aero’s vision for the future of eVTOLs is a one-person flying saucer-shaped vehicle that travels 160 miles per hour.

Transportation
Is this one-seat flying saucer the future of flight?
By Kristin Houser
Subscribe to Freethink for more great stories
Subscription Center
Sections
Video
Freethink
Subscribe
We focus on solutions: the smartest people, the biggest ideas, and the most ground breaking technology shaping our future.
Subscribe