The remains of a U.S. airman killed during the Vietnam War have finally been returned home, thanks to Project Recover, an initiative using 21st century tech to locate soldiers missing in action.

The challenge: Most American military personnel return home safely after serving, but some are killed, and others are missing in action.

The soldiers may have deserted or been captured, killed, or wounded, but their status is unknown, and it’s impossible to say for sure what happened — and that can leave their families in a state of emotional limbo.

Project Recover: Since World War II, the military has reported nearly 82,000 people as missing in action. Project Recover’s goal is bring closure to the families of those soldiers by locating their remains or clues as to what happened to them, such as downed aircraft.

To date, it has located more than 50 aircraft associated with more than 170 missing in action soldiers.

On August 2, the group reported its latest success: the recovery of the remains of U.S. Air Force Major Paul A. Avolese.

The details: Avolese was flying a mission over the South China Sea in 1967 when his plane collided with another aircraft. Seven of the 10 soldiers involved in the crash were rescued, but Avolese was one of the three who wasn’t.

In 2020, the U.S. military’s Defense POW/MIA Accounting Agency asked Project Recover to try to locate the wreckage of the two aircraft.

Using a fleet of 100 sonar-equipped autonomous underwater vehicles, the group surveyed about 8 square miles of seafloor near the planes’ suspected resting place. Scuba divers were then sent to investigate several sites, and Avolese’s remains were discovered at one of them.

No longer missing in action: The remains were sent to Hawaii for official identification. After that, they were turned over to Avolese’s family, and he was buried with full military honors.

“It was an honor to participate in the first ever partner survey for underwater MIA sites in Vietnam,” Andrew Pietruszka, Project Recover’s lead archaeologist, said in a news release.

“To successfully locate the site and also recover the remains of Maj. Avolese was incredible,” he continued. “It’s a testament to what can be accomplished with public private partnerships.” 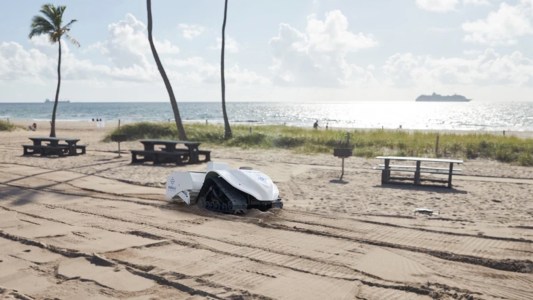 Robotics
This beach-cleaning robot is a Roomba for sand
By Kristin Houser
Subscribe to Freethink for more great stories
Subscription Center
Sections
Video
Freethink
Subscribe
We focus on solutions: the smartest people, the biggest ideas, and the most ground breaking technology shaping our future.
Subscribe