The cost of solar panels has dropped by 90% in the past decade — it’s even cheaper than coal and gas in most countries.

But still, for individuals, the upfront cost can remain a barrier to entry.

And although solar is one of the fastest-growing green energy markets, it still makes up only 3% of the world’s electricity.

If we want to beat climate change, we’ve got a long way to go. We need to make solar energy even more affordable.

However, there’s a problem: most solar panels use silicon. And silicon has just gotten a whole lot more expensive. Bottlenecks in the silicon supply chain are putting solar panel manufacturing at a standstill.

The silicon problem: ​​Silicon has dominated the solar panel industry for decades. Although other thin materials, like copper indium gallium selenide (CIGS) and cadmium telluride (CdTe), exist in the market, silicon remains the most prevalent semiconductor material used in solar cells, accounting for over 95% of all modules marketed today.

“You have this very limited supply chain that you can pull from, and that’s complicated, because it’s just prone to disruption.”

Solar panel companies turn to silicon because it is efficient and lasts a long time. A single panel lasts for at least 25 years, providing more than 80% of its initial power.

Despite the benefits, crystalline silicon is difficult to produce, which slows down the solar panel manufacturing process. In the past year, the cost of silicon has skyrocketed, up to a 300% increase, and the U.S. banned imports from China, due to a violation of international standards on child labor — making the second most abundant element on the planet an actual scarcity.

Alternative semiconductors: Some companies are ditching silicon for perovskite, a cheaper alternative. If they can commercialize low-cost perovskite films, the solar industry would change dramatically.

Perovskite panels can generate more power from the sun than almost anything else — at a fraction of the cost of silicon solar panels. Perovskite solar cell efficiency has increased quicker in the lab than any other PV material, from 3% in 2009 to over 25% in 2020.

In 2019, Polish start-up firm Saule Technologies outfitted the Henn na hotel in Nagasaki, Japan (the same hotel that had robot dinosaur concierges) with a striking curved wall of prototype perovskite solar panels. While perovskite is gaining momentum as a real possibility, this is one of the earliest out-of-the-lab installations.

More than a dozen companies worldwide want to sell perovskite panels, but most haven’t reached widespread commercialization. The companies include the British firm, Oxford PV, which is testing them at a site in Brandenburg an der Havel, Germany. Microquanta Semiconductor and WonderSolar, both Chinese, have been conducting field testing in Hangzhou and Ezhou.

There are still technical challenges to overcome: namely, the panels aren’t durable enough. They need to be stable enough to survive a few decades in the harsh outdoors — something researchers are working on.

To speed up the process, skip a step: A California startup is taking a different approach. They aim to speed up the manufacturing process by skipping a critical step altogether. Leap Photovoltaic has designed a panel that eliminates silicon wafers, which are the single most expensive component in the production of solar panels. Even the factories are expensive to build, so only a few manufacturers exist.

A wafer is a thin slice of crystalline silicon semiconductor. Semiconductors are used extensively to fabricate electronic circuits, such as within solar cells. The wafer is used as underlying material for building small electronic devices.

“You have this very limited supply chain that you can pull from, and that’s complicated, because it’s just prone to disruption,” David Berney Needleman, CEO of Leap Photovoltaic, said.

“It’s prone to not knowing if you’re going to be able to get material and components that you need, when you’re going to get it, and how much it’s going to cost—all the things that you think about being core to building a business are very shadowy in the solar industry right now.”

To alleviate this issue, Leap Photovoltaic skips the wafers and goes straight from silicon to completed solar cells, which may subsequently be turned into solar panels, reports Fast Company. Doing so could cut the cost of solar panels in half, they say. The process is similar to how 3D printing works: the solar cells are “printed” from a single layer of silicon. This could cut the cost of a solar panel in half, making it a more affordable energy source for more households.

Leap Photovoltaic is still in the early stages, having started in earnest in 2020. But Needleman thinks they could have prototypes ready for customers by 2023. Leap Photovoltaic’s potential for helping the solar business scale-up is huge: They told Fast Company that the company will have helped prevent more than 100 gigatons of emissions in just a few decades. 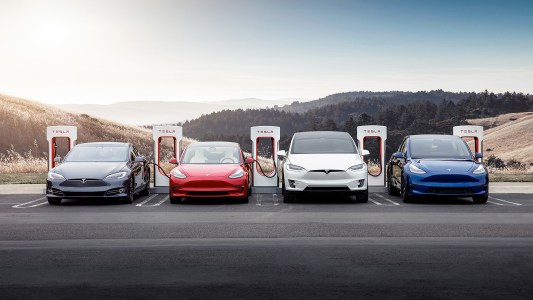 Non-Tesla EVs can now use a select number of Tesla Superchargers — and the goal is to expand that access to the entire Supercharger network.

Transportation
Superchargers are no longer just for Teslas
Subscribe to Freethink for more great stories
Subscription Center
Sections
Video
Freethink
Subscribe
We focus on solutions: the smartest people, the biggest ideas, and the most ground breaking technology shaping our future.
Subscribe