For the first time, Tesla is allowing any electric vehicle (EV) access to its Supercharger network. They’re testing this open access in a newly launched pilot program in the Netherlands — but if it works there, it could help accelerate the global adoption of EVs.

Why it matters: Passenger vehicles produce climate-warming emissions, so trading fossil fuel-powered cars and trucks for EVs is one way we can address climate change. But in 2019, only 2% of new vehicles sold in the U.S. were EVs. By 2030, the U.S. wants that number to be 50% — but a lack of charging infrastructure could stop that from happening.

Many people cite the hassle of charging as a major reason they’re hesitant to make the transition to EVs — and their concerns aren’t unfounded. Right now, our charging infrastructure is nowhere near robust enough to support the number of new EVs the U.S. wants to add to its roads.

“The lack of public charging stations may just be the most significant hurdle to the widespread adoption of EVs in the U.S.”

Slow charge: Of the nation’s 120,000 public charging ports, the majority are Level 2 chargers — those chargers take about 5 hours to top off an EV battery. Only about 18% of the ports (~21,600) are Level 3 “fast-chargers,” which can fully charge an EV in about an hour.

When you consider the fact that there are 1 to 1.5 million gas pumps in the U.S. — each of which can fill up a tank in minutes — it’s easy to see how some people would rather stick with their gas-powered vehicle than deal with EV charging.

So, we need to increase the number of Level 3 fast chargers — but doing so won’t be cheap as they can cost more than $120,000, including installation.

“The lack of public charging stations may just be the most significant hurdle to the widespread adoption of EVs in the U.S.,” according to the American Automobile Association (AAA).

Tesla Superchargers: Tesla owners have been in their own lane when it comes to EV charging thanks to the automaker’s dedicated network of Superchargers, which includes more than 25,000 ports (about 6,400 in the U.S.) capable of topping off an EV battery in less than an hour.

Now, Tesla is looking to open up that access with this pilot project.

“It’s always been our ambition to open the Supercharger network to Non-Tesla EVs, and by doing so, encourage more drivers to go electric,” the company wrote. “This move directly supports our mission to accelerate the world’s transition to sustainable energy.”

The details: The project includes 10 stations in the Netherlands. To use those Superchargers, non-Tesla EV owners simply need to download the Tesla app, create an account, and choose the “Charge Your Non-Tesla” option. That will guide them through the rest of the process.

“We’re starting with a select number of sites so that we can review the experience, monitor congestion, and assess feedback before expanding,” Tesla wrote.

“Our goal is to learn and iterate quickly, while continuing to aggressively expand the network, so we can eventually welcome both Tesla and Non-Tesla drivers at every Supercharger worldwide,” it added.

The local challenge: Opening up Superchargers to EV drivers in the U.S. won’t be as simple as granting them access via an app — the ports used in North America only work with Teslas, so adapters would need to be available at charging stations.

However, it could be a worthwhile endeavor. If all of the Superchargers in the U.S. were opened up to non-Tesla EV owners, that would instantly increase the number of fast chargers in the U.S. by about 30% — without requiring anyone to spend money on installing new stations. 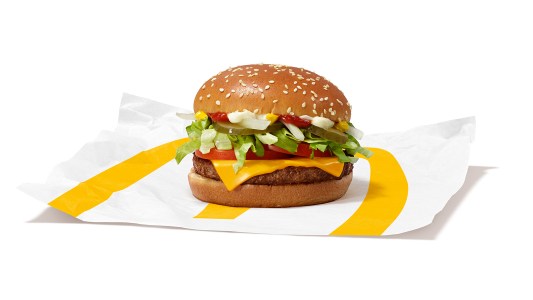 McDonald’s McPlant, a burger with a plant-based meat patty, is now available at select locations in the U.S. for a limited time.