On November 3, McDonald’s began selling the McPlant, a burger with a plant-based patty, at select locations in the U.S. — and if customers gobble it up, the fast food giant is prepared to add more plant-based meat products to its menu.

“In the future, McPlant could extend across a line of plant-based products including burgers, chicken-substitutes and breakfast sandwiches,” Ian Borden, president of McDonald’s International, said in 2020.

The challenge: Raising and slaughtering animals for their meat is bad for the environment and, arguably, unethical, but a decade ago, people who liked the taste of meat couldn’t get their fix anywhere else — a veggie burger tasted nothing like a beef one.

“McPlant could extend across a line of plant-based products including burgers & breakfast sandwiches.”

That’s changed in recent years, as a number of startups have developed plant-based meat alternatives specifically designed to taste — and even “bleed” — like the real thing.

Interest in plant-based meat is on the rise, with retail sales increasing by 27% between 2019 and 2020, but to maximize their adoption (and minimize demand for traditional meat), they need to be widely available at both supermarkets and restaurants.

The McPlant: With nearly 40,000 locations worldwide, McDonald’s is about as ubiquitous as restaurants get, and in 2021, it began offering diners at select overseas locations a plant-based burger co-developed with Beyond Meat.

Now, that burger — the McPlant — is finally making its U.S. debut, joining the menu at eight U.S. restaurants.

McDonald’s hasn’t specified which locations will serve the McPlant, but it has shared the cities hosting the restaurants: Cedar Falls, Iowa; Irving and Carrollton, Texas; Jennings and Lake Charles, Louisiana; and El Segundo and Manhattan Beach, California.

The cold water: In addition to a Beyond Meat patty made from peas, rice, potatoes, and other ingredients, each McPlant includes tomato, lettuce, pickles, onions, mayonnaise, ketchup, mustard, and a slice of American cheese.

The mayo and cheese means the burger isn’t vegan. It’ll also be prepared on the same cooking surface as McDonald’s meat and dairy products, which might deter some vegetarians from ordering it.

Wide appeal: That might not mean much for sales of the McPlant, though, as many of the people trying plant-based meat alternatives aren’t dedicated vegetarians or vegans.

“We are seeing that meat-eaters [and] flexitarians are interested in trying these options [at fast-food operators] and [their] appeal goes far beyond meatless consumers,” Alexandra Dallago, a spokesperson for plant-based protein startup Eat Just, told Business Insider. 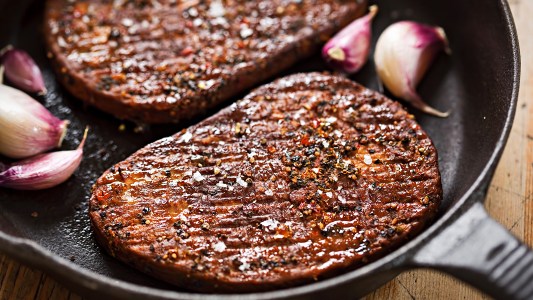 Startups around the world are racing to get mycoprotein — food based on fungus — to plates.

Food
Fungus-based “mycoprotein” may be the next future food
By B. David Zarley
Subscribe to Freethink for more great stories
Subscription Center
Sections
Video
Freethink
Subscribe
We focus on solutions: the smartest people, the biggest ideas, and the most ground breaking technology shaping our future.
Subscribe