In 1948, the USS Nevada — a battleship once deemed “unsinkable” — plunged beneath the surface of the Pacific Ocean, deliberately scuttled by one of the U.S. military’s own torpedoes.

On May 11, they announced that they’d found the historic ship — and had stunning images of the wreckage to share with the world.

Tracking Down the USS Nevada

Working only off of eyewitness accounts of the USS Nevada’s sinking, Ocean Infinity narrowed the ship’s final resting place down to an area covering 100 square miles.

The battleship was more than 15,400 feet below the water’s surface — almost three miles deep — but the depth wasn’t a problem for Ocean Infinity: its AUV is capable of operating at a depth of nearly 20,000 feet.

After they located the USS Nevada, Ocean Infinity’s researchers sent a remotely operated vehicle down to take photos of the wreckage, transmitting the pictures in real time to SEARCH’s office in Florida for analysis.

“We are proud to have participated in this historic mission, which provides a tangible example of how technology can magnify the potential for discovery,” James Pochurek, SEARCH’s president, said in a statement.

The U.S. Navy launched the USS Nevada in 1914, and over the course of the next 34 years, the ship became one of the most legendary vessels in U.S. military history.

It was deployed during World War I, and after the war ended, it served as part of the fleet that escorted president Woodrow Wilson to the Paris Peace Conference.

During the Japanese military’s attack on Pearl Harbor, the USS Nevada was one of eight battleships bombed, and after being repaired, it later participated in the Normandy Invasion (D-Day).

After its decommissioning in 1946, the USS Nevada was used as a target for the U.S.’s Bikini Atoll atomic testing experiments, during which it survived two nearby atomic bomb attacks.

In 1948, the ship became a target for gunnery practice, and when four days of that wasn’t enough to sink it, the U.S. military resorted to using an aerial torpedo.

That’s the story, anyways — based on SEARCH’s initial analysis of the wreckage images, Senior Vice President James Delgado told National Geographic he thinks it might have taken two torpedoes, not one, to sink the unsinkable battleship. 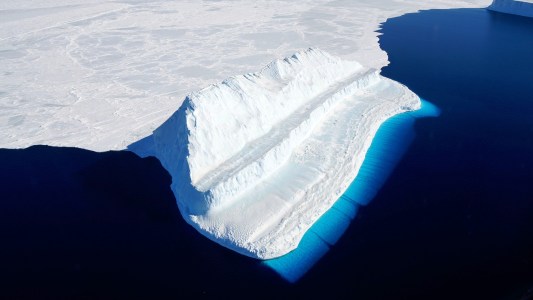 The International Ice Patrol is a real thing. They’re protecting our ships from iceberg collisions.

Oceans
The dangerous job of the International Ice Patrol
Subscribe to Freethink for more great stories
Subscription Center
Sections
Video
Freethink
Subscribe
We focus on solutions: the smartest people, the biggest ideas, and the most ground breaking technology shaping our future.
Subscribe