What can lift 500 pounds in each hand, walk for miles and miles with a heavy load, or leap over obstacles in a single bound?

Humans – with the help of wearable robotics.

Alan Asbeck anticipates in less than a decade, everyone will have seen somebody donned in a robot suit.

Asbeck is a real-life Tony Stark. He is an engineer building wearable robots for performance enhancement. He says the technology is on the rise. They can’t make a person fly like Iron Man, Stark’s alter-ego. But wearable robots do offer a superhuman quality.

Performance-enhancing wearable robotics comes in several forms. Exoskeletons have a rigid structure like bones strapped to the body, while exosuits are a textile system. Active robotics has a battery-powered motor, while passive robotics uses springs or cables to act like tendons.

It is the passive variety that Dr. Alan Asbeck and his group at Virginia Tech’s Assistive Robotics Lab are developing. Their exoskeletons relieve strain on the arms or back to assist people who work with their arms aloft or lift heavy objects. In 2017, Lowe’s Innovation Labs partnered with Asbeck’s group to give an exosuit a test-run in their Virginia warehouse. Asbeck said the suits proved to reduce the load on the body, allowing the back muscles to exert as much as 35% less effort.

Without a battery, the passive exoskeleton stores energy that comes from the user’s movement. For instance, a warehouse worker bends and lifts boxes all day long. Every time they bend over they flex a bow that extends between the legs and back. Like a stretched bow and arrow, the bow across the worker’s back springs back to the upright position. For people tasked with lifting, sorting, and moving heavy objects for an eight-hour shift, this exoskeleton could mean the difference between going home exhausted or having enough energy for a round of kickball with the kids.

Exoskeletons, on the other hand, are more familiar when used to restore mobility for disabled individuals. But, Asbeck estimates that it will only take a few years before labor industries adopt their use, and it won’t be long before passive suits become an affordable and commonplace use by the able-bodied. Exoskeletons could add years of enjoying an active lifestyle, like hiking, for the elderly by providing greater endurance.

“I think a lot of people are going to have them. They’re going to be cheap enough that companies are going to think it’s worth it to buy them for all their employees,” he said.

Zach Haas agrees. As senior product manager for EksoBionics, Haas noticed wearable robotics first commercial use in 2018. Now, workers in fifteen Ford manufacturing plants are using his EksoVest to help ease the strain of overhead tasks, like installing brake lines under a hoisted car. Haas says that as prices for wearable robotics continue to come down, there will be more manufacturing uses and consumer use.

“A lot of us wear a Bluetooth device in our ear now, and that was tech you saw the military wearing in a movie fifteen years ago,” Haas said, “It looks crazy and futuristic but now we all see that type of technology.”

If wearable robotics make you think less of Iron Man and more of Wall-E — where futuristic humans rely on robotic lounge chairs for mobility, rendering them too bloated to walk — David Perry, an engineer at Harvard Biodesign Lab, doesn’t show concern. He says these suits will maintain the health of people who do incredible physical feats. His leg exoskeleton, which soldiers tested, won’t alleviate all the stress on the wearer’s muscles. But it does make it easier to walk by about 15%, even while carrying a heavy load.

“You’re not going to be able to hang out while it moves you around. You still have to do a little bit of effort. So we’re helping you out a little bit,” he said, adding that the exoskeletons could reduce injuries from repetition and fatigue.

“Understanding the effects of using these regularly means that we’ve got to have a whole bunch of people wearing them for a very long time. So the field as a whole isn’t really going to know the answer to that for many years to come,” said Perry.

Yet some exoskeletons do more than provide gentle assistance. Sarcos Robotics is building an active exoskeleton that allows the wearer to lift 200 pounds. Kristi Martindale, Executive Vice President of Sarcos Robotics, says that wearable robotics will be an important tool for filling the labor shortage gap by bringing more people into manufacturing trades and increasing their working life.

“I could not lift 100 pounds repeatedly in a workday. So (wearable robotics) gives somebody like me the ability to work in an industry where I would not be capable otherwise,” she said. Sarcos Robotics’ Guardian XO is designed to move with you, anticipating each gesture and staying one step ahead – like opposing magnets that never collide. It is similar to an electronic bike, where a motor assists the effort made by the human wearer. What’s more, it looks futuristic – think Iron Man, complete with the molded shoulders and chest emblem.

With wearable robotics on a test-run in manufacturing industries, experts agree the likely next step is consumer use. A future where ordinary citizens drop by a local hardware store to pick up a robot suit isn’t too far-fetched.

To see how exoskeletons are helping people with disabilities accomplish amazing feats, check out this new Superhuman video about Adam Gorlitsky who is using one to complete his first marathon this coming January. 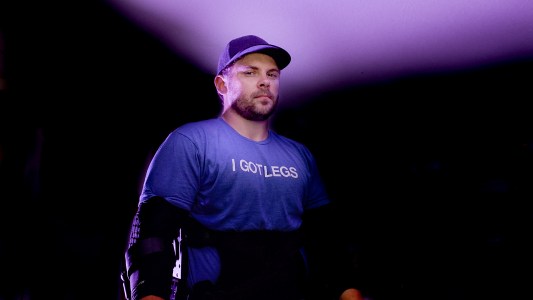