However, those wireless chargers typically require your device to remain very close to the charger and stationary — pick it up, and the charging stops. Plus, the chargers still require power cords themselves, meaning they don’t exactly help declutter your living or working spaces.

The system is already powerful enough for sensors and could charge mobile devices with further development.

Researchers have started developing technologies that charge devices over the air — these could be used to turn entire rooms into wireless chargers, meaning your device would start powering up as soon as you entered.

However, many wireless charging prototypes require that the entire room be modified, which isn’t terribly practical.

Others only work over distances of a few meters — that prevents their use in larger spaces, such as factories, where wireless power could eliminate cords that pose a safety hazard.

What’s new? Researchers at Sejong University in South Korea have now demonstrated a wireless charging system capable of powering devices from up to 30 meters (98 feet) away without requiring that an entire room be modified.

According to the researchers, the system already delivers 400 mW of light power, which is enough to charge sensors, such as the ones in internet-of-things devices, and it could be capable of charging mobile devices with further development.

How it works: The Sejong team’s wireless charging system is based on a method called “distributed laser charging,” and it consists of two parts: a transmitter and a receiver.

When the transmitter and receiver are in sight of each other, a “laser cavity” forms between them. Power — in the form of safe infrared light — then travels over the air from the transmitter to the receiver. A photovoltaic cell in the receiver converts the light power into electricity.

The receiver is just 10-square millimeters — small enough to be integrated into many devices and sensors — and if the space between the transmitter and receiver is blocked, the system automatically switches into a low-power delivery mode.

Looking ahead: The researchers are now working to make their wireless charging system more practical.

Increasing the efficiency of the photovoltaic cell is one possible upgrade — right now, it only converts the 400 mW of light power into 85 mW of electricity. Figuring out how to get the system to charge more than one device at a time is another.

If they can succeed, sensors and personal tech devices could be manufactured with built-in receivers in the future and then powered by transmitters mounted in homes, factories, airports, and more. 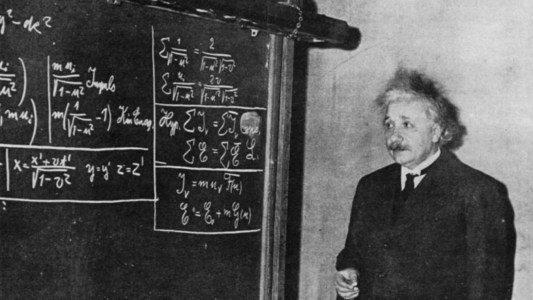 Although most people can name Einstein’s most famous equation, E = mc², very few people can explain what it means.

Physics
The true meaning of Einstein’s most famous equation: E=mc²
Subscribe to Freethink for more great stories
Subscription Center
Sections
Video
Freethink
Subscribe
We focus on solutions: the smartest people, the biggest ideas, and the most ground breaking technology shaping our future.
Subscribe