A new study out of NYU’s Grossman School of Medicine has used elderly monkeys’ immune systems to stop the progression of Alzheimer’s disease.

The treatment, published in Brain, also led to increased cognition levels in the monkeys compared to those who had received a placebo, putting them about on par with younger animals.

“Our findings illustrate that this therapy is an effective way of manipulating the immune system to slow neurodegeneration,” Akash Patel, an assistant research scientist in the Center for Cognitive Neurology at NYU Langone Health, said in NYU’s release.

A massive burden: The Alzheimer’s Association estimates that 6.2 million Americans are living with Alzheimer’s right now; they expect that number to essentially double by 2050.

Despite its prevalence and horrors, Alzheimer’s has proven maddeningly resistant to any and all attempts to treat it. Drug after drug has performed well in models — mice, for example — only to fail to alter the disease’s path at all in humans, much less save lives.

This is not for a lack of trying; just recently, the FDA approved the first new Alzheimer’s drug in decades, albeit one whose approval has proven controversial. That drug, aducanumab, uses an antibody to help eliminate plaques of a protein called amyloid, one of the hallmarks of Alzheimer’s pathology, along with tangles of tau proteins.

The drug did not, however, show any cognitive improvement in patients.

The NYU researchers looked to harness these innate immune cells, giving them a boost with drugs called CpG oligodeoxynucleotides so they can better do the job of cleaning out the brain. This study is the first to do so in monkeys, co-senior author Thomas M. Wisniewski said in the release.

Squirrel monkeys develop a form of neurodegeneration as they age that is very similar to Alzheimer’s disease, Wisniewski says, making them effective models for the human disease. The researchers took 15 elderly female squirrel monkeys between the ages of 17 and 19, with eight receiving the drugs and the rest a placebo. The drug was administered once a month for two years.

The monkey’s’ blood and tissues were studied, and their behavior observed. At the end of the treatment’s course, the monkeys who had received the drugs had 59% fewer plaque deposits in their brains than did the placebo monkeys, GEN reports. They also had lower levels of tau tangles, and they did not suffer major inflammation from the treatment — a side effect that has afflicted other Alzheimer’s treatments (including aducanumab).

To prevent inflammation, the researchers administered their drugs in a rolling method, allowing the immune system time to recover between each jolt.

“Our new treatment avoids the pitfalls of earlier attempts because it is delivered in cycles, giving the immune system a chance to rest between doses,” Wisniewski said.

A treatment evolution: Mice are essential for medical testing, but they are also notorious liars, perhaps in no field more so than in Alzheimer’s; many a mouse has been apparently cured of the disease (and caused some misguided, rosy media coverage as a result).

The tendency for researchers to leap from mouse models to humans too quickly “has been cited as one of the significant reasons for the failure of the vast majority of AD clinical trials,” per GEN.

Our findings illustrate that this therapy is an effective way of manipulating the immune system to slow neurodegeneration.

With that in mind, the research team took this intermediate step between mice and people. But a non-human primate is still, well, not a human, and human clinical trials will, as always, be the final hurdle. Trials in people with mild cognitive impairment and early forms of dementia are on deck, study co-senior author Henrieta Scholtzova said in the release.

“The similarities in aging between the animals studied and our own species give us hope that this therapy will work in human patients as well,” Scholtzova said. 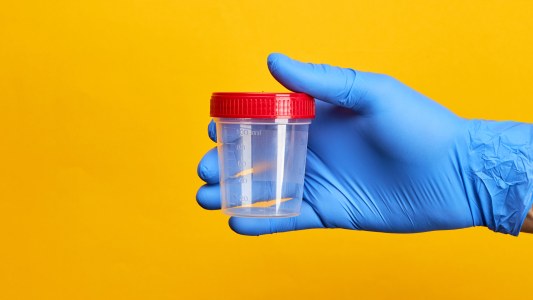 A new urine test for brain cancer analyzed microRNAs to correctly identify 100% of patients with brain tumors, regardless of their tumor’s size.