A new urine test for brain cancer was able to correctly identify 100% of patients with brain tumors, regardless of their tumor’s size — a sign it could be a useful method for detecting the potentially deadly disease.

The challenge: By the time a person starts experiencing symptoms of a brain tumor, their disease may already be well advanced. That’s a big problem because early diagnosis is one of the best ways to improve treatment outcomes.

MRI or CT scans can detect brain tumors before symptoms develop, but because those tests are expensive and complicated, they aren’t scalable.

The idea: Rather than looking directly at the brain for signs of cancer, researchers have started hunting for them in blood and urine.

These types of signs are called biomarkers, and if we can accurately detect them, we’d have a straightforward way to test people for cancer and monitor the efficacy of treatments.

What’s new? Tiny molecules called microRNAs are one promising biomarker for cancer. These molecules can be found in urine, but because there isn’t an efficient way to extract them from it, no one has been able to take advantage of their presence to detect brain cancer.

That may be changing, though.

In a new study, Nagoya University researchers report the development of a device that can extract huge amounts of microRNAs from even a small urine sample. They then developed a test that could analyze the microRNAs to determine whether or not a person has a brain tumor.

The urine test: To determine the efficacy of their urine test for brain cancer, the researchers collected samples from about 200 people, half with brain tumors and half without them.

They found that the test had a sensitivity of 100% and a specificity of 97%. That means it correctly identified all the patients with tumors — it didn’t matter what size their tumor was, or whether it was malignant or benign.

The goal is to detect brain cancer before patients even feel like they’re sick.

It falsely classified 3% of the healthy people as having brain tumors, but correctly cleared the other 97%.

The next steps: The Nagoya team says its device can be mass-produced and sterilized — important for anything with a medical use.

They’re hopeful their urine test for brain cancer could one day be used for mass screenings, giving doctors a chance to begin treating cancer patients before the patients even feel like they’re sick.

However, because brain cancer is rare (just 6 cases per 100,000 people per year), unless they are able to get the rate of false positives down, the vast majority of positive results from screening the general population will be false positives. 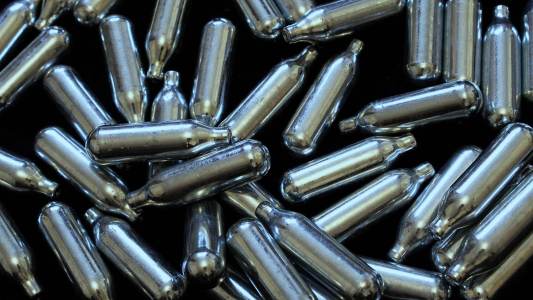 A new, small study has found that low doses of nitrous oxide — laughing gas — can treat symptoms of depression.