Nearly a century ago, the discovery of penicillin — the first naturally-occurring bacteria-killer — spurred the creation of an entirely new class of medicines: antibiotics.

Armed with these drugs, doctors finally had a way to combat the bacterial infections that were the top cause of death at the time. But decades of overuse has had a deadly side effect: some bacteria have evolved to resist once-effective antibiotics, a problem dubbed “antibiotic resistance.”

“Antibiotic resistance is a global crisis that we cannot ignore,” Tedros Adhanom Ghebreyesus, Director-General of the WHO, said in 2017.

“If we don’t tackle this threat with strong, coordinated action,” he continued, “antimicrobial resistance will take us back to a time when people feared common infections and risked their lives from minor surgery.”

Now, a University of Göttingen-led research team has a new lead in the hunt for effective weapons against these superbugs: antivitamins.

As the name suggests, antivitamins are substances that interfere with the function of vitamins.

Researchers at Göttingen knew that some bacteria produce an antivitamin for vitamin B1, which kills off other bacteria in their environment, essentially wiping out their competition.

However, they didn’t know exactly how the antivitamin did this — and that’s the question they sought to answer with their new study, published in the journal Nature Chemical Biology.

Because the B1 antivitamin is nearly identical to the vitamin itself — it has just one extra atom — the researchers decided to focus on that atom.

Antibiotic resistance is a global crisis that we cannot ignore.

When they exposed drug-resistant E. coli to the B1 antivitamin, they found that the extra atom interfered with the function of one protein in the bacteria’s metabolic processes.

“Just one extra atom in the antivitamin acts like a grain of sand in a complex gear system by blocking its finely tuned mechanics,” researcher Kai Tittmann said in a press release.

They then used computer simulations to model how the antivitamin would affect humans and determined that our proteins either wouldn’t bind to it or wouldn’t be “poisoned” by it.

Based on this new research, the Göttingen team believes the B1 antivitamin holds promise as the basis for a new antibiotic, though further research in animals and humans would be needed to confirm the theory.

Antibiotic Resistance in the Crosshairs

Even if the B1 antivitamin proves to be a dead end in the hunt for solutions to antibiotic resistance, though, the scientific community has plenty of other leads.

MIT researchers recently developed an AI capable of quickly analyzing thousands of compounds for antimicrobial properties. That research led to the discovery of a molecule called halicin that shows promise as a powerful new antibiotic.

Then there are the researchers looking for ways to train our own bodies to fight antibiotic-resistant superbugs, eliminating some of the need for antibiotics altogether.

Still others are looking to medieval medicine for answers to the modern problem of antibiotic resistance — and if that isn’t hardcore enough, some scientists are discovering potential weapons against superbugs in the blood of dragons. 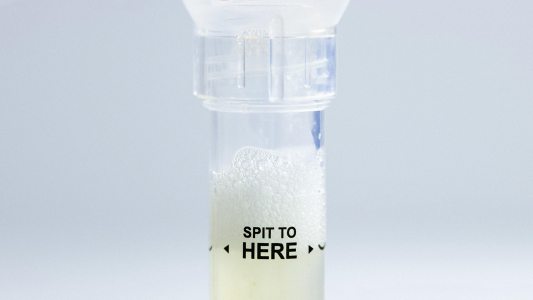 SalivaDirect, a COVID-19 saliva test funded by the NBA and NBA players’ union, could be the cheap, accurate testing method the U.S. desperately needs.

Coronavirus
Open-source COVID-19 saliva test could be a game changer
By Kristin Houser
Subscribe to Freethink for more great stories
Subscription Center
Sections
Video
Freethink
Subscribe
We focus on solutions: the smartest people, the biggest ideas, and the most ground breaking technology shaping our future.
Subscribe