To return to something resembling normal life, experts say the U.S. needs frequent, widespread COVID-19 testing — though their suggestions vary, something around one to four million tests daily should suffice.

But the U.S. conducted just 750,000 tests daily in July, and rather than increasing in August, that average is dropping.

Part of the issue is that overwhelmed labs are having trouble quickly processing tests, in part because of shortages of testing supplies. That can lead to delays in results, which come too late to help people quarantine or inform their contacts.

That could be changing, though, thanks to SalivaDirect, a COVID-19 saliva test developed by Yale University, with support from the NBA and the NBA players’ union.

On August 15, the FDA issued an emergency use authorization for the test. And while it’s not the first saliva test for coronavirus — it’s actually the fifth — it could be the one that finally makes widespread, frequent testing possible in the U.S.

COVID-19 saliva tests have a few benefits over ones that require nasal swabs.

For one, they’re much less uncomfortable than the nose/throat swab, which could encourage more people to get tested more often. And because they don’t require healthcare workers to get as close to patients, they minimize the risk of transmission and the need for personal protective equipment.

The key difference between SalivaDirect and other diagnostic tests — saliva-based or otherwise — is that it doesn’t include a separate step to extract the coronavirus’s genetic material (if present) from a sample.

“This is significant because the extraction kits used for this step in other tests have been prone to shortages in the past,” the FDA wrote. “Being able to perform a test without these kits enhances the capacity for increased testing, while reducing the strain on available resources.”

Swabs are also occasionally in short supply, so that’s another potential bottleneck SalivaDirect eliminates — it can work with a saliva sample collected in any sterile container.

Another potential benefit? Saliva may make it easier to pool samples, which would allow even more group coronavirus testing — potentially enabling labs to test several times as many people with the same equipment.

A final major difference between Yale’s COVID-19 saliva test and others? The Yale researchers aren’t charging for it.

Rather than producing a test kit with special equipment or chemicals with the intention of manufacturing and selling it, the researchers designed an open-source protocol that they validated using a variety of reagents and lab instruments.

Now that they’ve secured FDA authorization, they’re sharing this protocol with all laboratories free of charge.

That means that instead of paying $150 for a COVID-19 saliva test — the cost of a test being sold by Vault Health — patients could pay $10 or less for SalivaDirect, researcher Anne Wyllie told the Yale Daily News.

The Baller Benefactors of SalivaDirect

Patients will be getting more for their money, too — with a sensitivity of 90%, SalivaDirect is the most accurate of the available saliva-based coronavirus tests, according to a paper published on the preprint server medRXiv.

That’s not as accurate as some COVID-19 tests, but labs would be able to provide patients with results in just a few hours, rather than days.

“(SalivaDirect) loses a little bit of sensitivity, but what we gain is speed and that it should be up to 10 times cheaper,” researcher Nathan Grubaugh told ESPN.

As for why ESPN is covering a new coronavirus test, the NBA and players’ union not only served as the Yale team’s benefactors, they also agreed to assume the role of lab rats, taking the test so the researchers could gauge its accuracy against nasal swab tests.

The results almost always matched, and now that the COVID-19 saliva test has proven itself in the Orlando bubble, it’s ready for the national stage.

“Wide-spread testing is critical for our control efforts,” Grubaugh said in a news release. “If cheap alternatives like SalivaDirect can be implemented across the country, we may finally get a handle on this pandemic, even before a vaccine.” 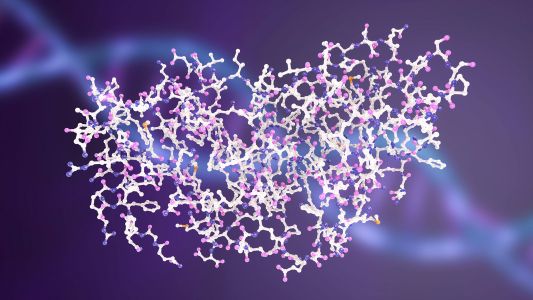 Immune proteins called interferons appear useful as a COVID-19 treatment if given to patients before an infection becomes severe.