A broken eye socket is about as fun as it sounds — in addition to being painful, it can also impair vision, cause nerve damage, and lead to permanent disfigurement.

If the break is severe, doctors may need to repair the crack with an implant, and the better this implant fits, the less likely the patient is to experience complications after the surgery.

The Age of AR Surgery

Unlike virtual reality, where a person’s surroundings are entirely replaced by digital images, AR projects CGI images and data onto the real world, creating a new layer of information — and that extra layer can be incredibly useful in the operating room.

Rather than constantly having to look back and forth between a patient and a computer screen to plan their next move or check a patient’s vitals, surgeons can see all the information they need, mapped out right on a patient’s body.

“It’s like a car that has the speedometer projected on the windshield, so you don’t have to look down when you’re driving,” Jonathan Vigdorchik, an orthopedic surgeon at the Hospital for Special Surgery, said in December.

This can improve efficiency in the operating room the same way GPS navigation can lead to more efficient driving.

“Everyone knows how to drive home,” Vigdorchik said, “but you use GPS technology to find the best and most efficient route to take.”

The entire AR surgery took just an hour and a half.

Vigdorchik has first-hand experience with AR surgery — he was part of a team that performed the first AR-assisted knee replacement in the U.S.

Other groups have used AR surgery to help them reconstruct a patient’s legs and even place screws in a person’s spine, and now, the Israeli doctors have used it to implant a new 3D-printed eye socket in a patient.

Prior to the AR surgery, which took place at Galilee Medical Center (GMC), the 31-year-old patient was experiencing double vision due to an injury that fractured the floor of his left eye socket. His face was also less symmetrical than it had been prior to the injury.

Doctors at GMC used CT scans of the patient’s right eye socket to model a corrective implant for his left eye. They then 3D printed an implant out of titanium.

During the surgery, one of the doctors wore a Microsoft HoloLens headset connected to the modeling software — they used the virtual model as a guide for the real-time placement of the implant in the patient.

The entire AR surgery took just an hour and a half, and the patient was able to leave the hospital several days later.

“The innovative technology utilizing a 3D printer and augmented reality resulted in both a particularly accurate execution of the operation and a significant reduction in time,” lead surgeon Samer Srouji told the Jerusalem Post.

AR
Magic Leap reveals release date, price for new AR glasses
Two years after laying off half of its staff, Magic Leap is back with a new pair of AR glasses, the enterprise-focused Magic Leap 2.
Up Next 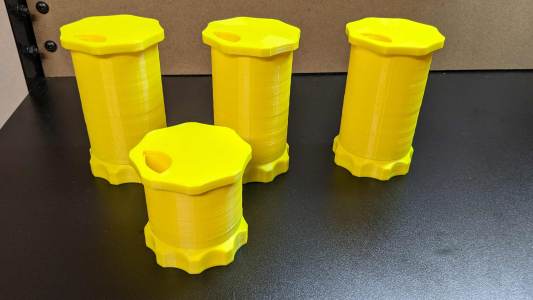 TikTok users are rallying to help elite athlete Jimmy Choi by designing a pill bottle that’s easier to use when his hands shake due to Parkinson’s disease.