Jimmy Choi is an elite athlete. He’s run more than a dozen marathons, holds the world record for both push-ups and burpees, and has competed on four seasons of American Ninja Warrior.

He’s also been living with Parkinson’s since 2003.

More than 150,000 people follow Choi’s TikTok account, where he regularly posts videos of himself completing physical challenges that make my muscles ache, as well as clips highlighting his experience with Parkinson’s, which afflicts more than 10 million people worldwide.

In late December, he posted a video demonstrating his difficulty removing just one pill from his bottle of meds — his hands were shaking (a common symptom of Parkinson’s) and the pills are very small.

“I can break fitness world records, but I can’t take a pill I need to function,” he told Freethink. “It’s like a dream and a nightmare rolled into one.”

Within days, videographer Brian Alldridge posted his own TikTok video showing a pill bottle he designed to address Choi’s problem.

“From concept sketches to publishing the first model took about two days for someone who had never worked in CAD,” Alldridge told Freethink, referencing the design software program that he quickly taught himself to use after seeing Choi’s video.

That was only the beginning, though.

In his TikTok video, Alldridge offered to send his files to anyone who wanted to create an actual prototype of the pill bottle using a 3D printer — and the response blew him away.

“I expected maybe one or two people to message me and subsequently back out when I couldn’t guarantee that the device would actually work,” he said. “Instead, I woke up to thousands of users offering to print the thing and even more telling of someone they knew that could benefit from it.”

Together, the TikTok community 3D printed and tested multiple versions of the pill bottle, eventually sending a prototype to Choi to test for himself so that they could take his feedback into consideration.

“I am still amazed and in awe how the community jumped into action,” Choi said. “I think the design is up to version 5, and I am now waiting to receive one of those.”

According to Alldridge, the format of the TikTok platform deserves much of the credit for the project taking off.

“The way that the app prioritizes content that people engage with on a per-view basis allows for all ideas to be considered by the user’s peers on the app, rather than a situation where highly subscribed creators dominate the main space regardless of interest,” he explained.

“Because of this,” Alldridge continued, “the app was able to figure out what type of people were engaging with the content, which was 3D printers in our case, and rapidly connected a community of amazing people willing to help.”

Alldridge has handed off the task of updating the project files to engineer David Exler, who posted a video to his TikTok account, @HungryEngineer, on January 6 showing the fifth version of the pill bottle.

The goal now is to get the prototype to people with Parkinson’s for feedback.

Exler is offering to ship a bottle anywhere in the U.S. if people either Venmo him $5 to donate to the Michael J. Fox foundation for Parkinson’s Research or show proof they’ve made a donation directly.

If you think of a way to improve the lives of others, there’s most likely a way to make it happen.

In the meantime, Alldridge is working with a patent attorney to ensure the project files are always available to the public. He then plans to meet with manufacturers to see how cheaply the bottle can be produced.

The ultimate goal is to sell them at a low cost to consumers and then donate one pill bottle to a nonprofit for every unit sold.

According to Alldridge, the project shows just how much people can accomplish using technology that’s now widely available — as long as they’re willing to put in the effort.

“We have more tools and learning resources at our fingertips than ever before,” he said. “If you think of a way to improve the lives of others, there’s most likely a way to make it happen — you just have to take the first steps.” 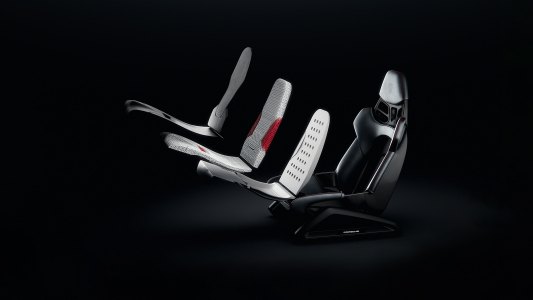 Automakers are relying more heavily on 3D printing, and for drivers, that means more customization options.

3D Printing
The next car you purchase could include 3D printed parts
By Kristin Houser
Subscribe to Freethink for more great stories
Subscription Center
Sections
Video
Freethink
Subscribe
We focus on solutions: the smartest people, the biggest ideas, and the most ground breaking technology shaping our future.
Subscribe