Researchers have developed what may be the most natural bionic arm ever, a device so intuitive, wearers don’t have to change their thinking to use it.

“For the first time, people with upper limb amputations are now able to again ‘think’ like an able-bodied person, which stands to offer prosthesis wearers new levels of seamless reintegration back into daily life,” lead author Paul Marasco said in a press release.

The challenge: Bionic arms contain sensors that press against the skin of the wearer’s residual limb. The sensors are trained to translate electrical signals from the person’s nerves into commands for the bionic arm.

The problem is this system usually only allows for one-way communication. The wearer can control the prosthetic with their mind, but they can’t get any feedback from the arm. This means they can’t tell when it has moved within reach of a cup, for example, or feel when their fingers have gripped it.

To account for that, they have to watch the arm whenever they want to use it — something a person with a natural arm doesn’t have to do.

Bionic arm wearers also have trouble learning from their mistakes — they might understand that they previously gripped a cup too lightly (because they dropped it), but don’t know how to adjust their grip to avoid the same accident in the future.

What’s new? Now, a Cleveland Clinic-led team of researchers has developed a mind-controlled bionic arm that also provides feedback on movement and touch — something they say no other prosthetic has done before.

“You can buzz their muscles and generate these … perceptual illusions of complex hand movement.”

It delivers this feedback using little robots that press on the wearers’ skin, vibrating in ways that trigger nerves to tell the brain how the bionic arm is moving.

“You can buzz their muscles and generate these really kind of interesting things — these perceptual illusions of complex hand movement,” Marasco told CNET.

Bionic vs. Biologic: To test the bionic arm, two people with upper arm amputations used it while performing tasks designed to mimic everyday behaviors. During the tasks, eye- and body-tracking tech recorded their motions.

The researchers then compared this data with that of people performing the same tasks using other prosthetics or natural limbs.

They found that wearers of the new bionic arm completed the tasks with about the same level of accuracy as the non-amputees — and they also acted a lot like them.

“Perhaps what we were most excited to learn was that [the bionic arm users] made judgments, decisions, and calculated and corrected for their mistakes like a person without an amputation,” Marasco said in the press release.

“With the new bionic limb, people behaved like they had a natural hand,” he continued. “Normally, these brain behaviors are very different between people with and without upper limb prosthetics.”

Looking ahead: The sample size for the study was small, so trials with more people are needed to truly determine how much the bionic arm can mimic the real thing.

If the trial results hold up, the researchers hope their decision to use an off-the-shelf prosthetic as the basis for their bionic arm will help speed up the approval process and keep costs low.

AR
Augmented reality will give us superpowers

Bionics
Man builds his own bionic hand out of melted plastic bottles
After creating a bionic hand for himself, Peruvian engineer Enzo Romero launched a company to sell the low-cost prosthetics to others.

Bionics
Bedridden woman stands again thanks to spinal implant
A spinal cord stimulator is helping a woman who was bedridden for 18 months because she fainted every time she stood up regain her mobility.
Up Next 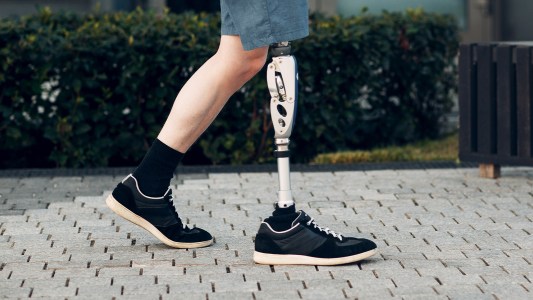 MIT and Brown researchers have developed a technique using implanted magnetic beads that they hope will lead to better control of prosthetic limbs.