A University of Cambridge-led research team has unveiled a personalized blood test for cancer monitoring that can find one molecule of tumor DNA in a sample containing more than a million DNA molecules — a sensitivity up to 10 times greater than existing methods.

This technique could one day speed up the detection of a cancer relapse or let doctors know more quickly if a treatment wasn’t effective. Eventually, it could even support the creation of an at-home blood test for cancer that patients could self-administer.

A Blood Test for Cancer

Over the past decade, doctors have started relying more and more on a technique called a “liquid biopsy” when treating cancer patients.

While standard biopsies involve the invasive extraction of a tissue sample from a patient, a liquid biopsy only requires drawing their blood. The doctor can then analyze the blood for cancer biomarkers.

“This is like detecting a needle in the haystack.”

One of the most common of those biomarkers — and the one at the center of this new study — is circulating, cell-free tumour DNA (ctDNA): small pieces of genetic material that tumors shed into the bloodstream.

ctDNA contains mutations not found in a patient’s own DNA, so doctors can use genetic analysis technology to hunt for those mutated molecules in the patient’s blood — if they find them, they’ll know a patient still has cancer, without subjecting them to an invasive procedure.

The problem is the sensitivity of current liquid biopsy techniques — they’re typically designed to look for 10 to 20 mutations and, from a test tube of blood, might spot one mutant piece of DNA among 30,000 molecules.

“(I)n patients with small tumors or after complete resection of their tumor using surgery, the concentration of cancer DNA in the blood can be low and can be challenging to detect,” researcher Jonathan Wan explained in a video. “This is like detecting a needle in the haystack.”

To improve upon this type of blood test for cancer monitoring, the Cambridge team sequenced both a patient’s tumor to identify hundreds or even thousands of mutations they could then look for in a blood sample.

Essentially, they dramatically increased the number of potential needles that are available to find in the haystack.

They then combined this increased number of targets with methods to enhance the signal of the mutations and dubbed their finished approach the Integration of VAriant Reads (INVAR) pipeline.

When they used INVAR to analyze samples from 105 patients, with five different types of cancers in various stages, they found it could regularly detect one mutant molecule in 100,000 pieces of DNA.

In some cases, the technique could even find one cancer molecule within a million pieces of DNA, according to the study the researchers published in Science Translational Medicine.

The team believes the methods they developed for INVAR could eventually decrease the size of the sample required to effectively detect ctDNA, too, shrinking the size of the haystack, as well as increasing the number of needles in it.

One day, they claim in a press release, INVAR could even lead to the creation of a pinprick home blood test for cancer, giving cancer survivors the ability to routinely monitor themselves for signs of relapse. (But given the history of such claims, it’s probably best to wait for more evidence before celebrating.)

“At present this is still experimental, but technology is advancing rapidly, and in the near future tests with such sensitivity could make a real difference to patients,” lead researcher Nitzan Rosenfeld said.

Virology
At long last, we might have an HIV vaccine
Due to HIV-1’s extraordinary diversity, a vaccine needs to induce antibodies that can target many different strains.
Up Next 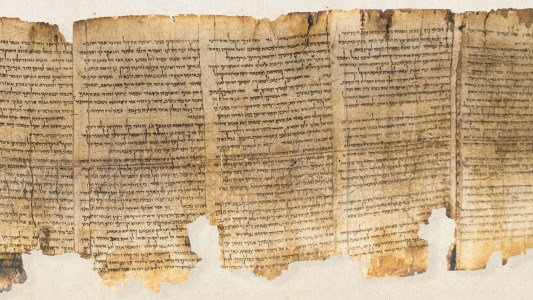 Scholars’ understanding of the Dead Sea Scrolls may be enhanced by an unusual source: the DNA of the animals they’re printed on.

History
Secrets of the Dead Sea Scrolls may be in animal DNA
Subscribe to Freethink for more great stories
Subscription Center
Challenges
Video
Freethink
Subscribe
We focus on solutions: the smartest people, the biggest ideas, and the most ground breaking technology shaping our future.
Subscribe