A former science teacher who had been blind for 16 years can see again, thanks to a startling scientific breakthrough.

The combination of a brain implant and a prosthetic that incorporates a camera allows her to see basic shapes and even play games — without using her eyes.

How it works: Researchers from Spain and America made a significant breakthrough with the implant placed into Berna Gómez’s brain. After a training period, the implant ultimately allowed her to “see” letters and the outline of objects. Her newfound vision was clear enough that she could play a “Simpsons” video game, according to the university.

“One goal of this research is to give a blind person more mobility. It could allow them to identify a person, doorways, or cars easily. It could increase independence and safety.”

The implant directly stimulates the visual cortex, the part of the brain that ordinarily receives and processes visual information coming from the retinas. The team also had to create an artificial retina — essentially, a video camera mounted to a pair of glasses — to provide the visual signal to the implant, bypassing the damaged optic nerve.

For six months the researchers worked with Gomez to study how the brain implant impacted her ability to see letters and shapes, according to the study published in The Journal of Clinical Investigation, she didn’t experience any adverse problems or concerns. After a training period, which included playing video games, Gómez’s brain was able to understand visual information that the brain implant was delivering straight to her brain.

“These results are very exciting because they demonstrate both safety and efficacy,” said researcher Eduardo Fernández of Miguel Hernández University, in a statement. “We have taken a significant step forward, showing the potential of these types of devices to restore functional vision for people who have lost their vision.”

Seeing into the future: About 148 million people in the world have lost their vision because the optic nerve — the link between the eyes and brain — is destroyed, reports The Science Times. Conditions like glaucoma or optic nerve atrophy are among the leading causes of blindness. Bypassing the eyes and sending visual information directly to the brain is a promising option for restoring sight for some people.

But there is still more work to do. The researchers told NPR that past studies have shown it takes 700 electrodes to help a blind person regain mobility. In this study, the tiny brain implant was just 4 mm square and held 96 electrodes. Still, it only took small electrical currents to stimulate the visual cortex enough to see general shapes. The team hopes to boost their electrode count in further studies, finding the right balance between implant size and visual strength.

“One goal of this research is to give a blind person more mobility,” said researcher Richard Normann, from the John A. Moran Eye Center at the University of Utah. “It could allow them to identify a person, doorways, or cars easily. It could increase independence and safety. That’s what we’re working toward.” 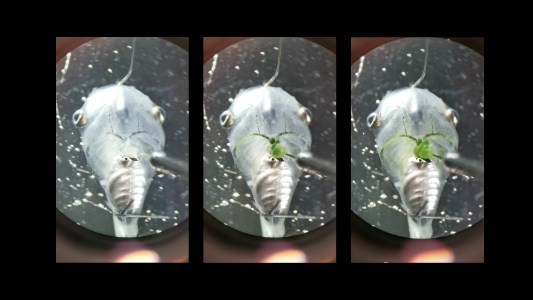 Scientists discovered a way to keep tadpoles alive, even without environmental oxygen — by injecting photosynthetic algae into their brains.

Biology
Scientists got an animal to breathe without oxygen
By Teresa Carey
Subscribe to Freethink for more great stories
Subscription Center
Sections
Video
Freethink
Subscribe
We focus on solutions: the smartest people, the biggest ideas, and the most ground breaking technology shaping our future.
Subscribe