Update, 9/13/21, 10 AM ET: The NHS officially launched its trial of GRAIL’s cancer blood test on September 13. Initial results are expected to arrive by 2023, and if the test proves successful, the NHS hopes to expand the trial to include an additional one million people in 2024 and 2025.

There are more than 100 types of cancer, and while their symptoms, causes, and treatments can vary, they all have one thing in common: the sooner a cancer is detected, the greater the chance of beating it.

Detecting cancer early isn’t easy, though, as some don’t cause symptoms until they’re already advanced.

Routine screenings, such as colonoscopies or mammograms, can catch these cancers early, but those tests can be painful, invasive, and costly. Meanwhile, we don’t even have effective screening methods for most cancers.

Now, the U.K. National Institutes of Health (NIH) is testing a cancer blood test designed to detect 50 types of cancer at once — and if it’s effective, the test could be a gamechanger in cancer screening.

The test works by looking for small pieces of a tumor’s DNA within a sample. It then determines the source of the cells’ abnormal DNA (lung, colon, etc.) to pinpoint the type of cancer.

In March, the company published a study reporting that an earlier version of the test was able to detect more than 50 cancers, including ovarian cancer, pancreatic cancer, and several other types that are hard to diagnose early.

The test was able to detect the cancers at all stages of development, had a false positive rate of less than 1%, and was able to pinpoint the source of a cancer with 93% accuracy.

Galleri isn’t the only cancer blood test in development, but it could have a few advantages over the others.

In July, researchers at Fudan University in China reported on another blood test for cancer, PanSeer, but it could only detect five types of cancer. Johns Hopkins researchers’ CancerSEEK does a little better, detecting eight types of cancer, but both fall well short of Galleri’s 50.

A team at the University of Cambridge has developed its own highly sensitive cancer blood test, INVAR, but it’s designed to detect tumor DNA that would indicate a cancer relapse — not to screen outwardly healthy patients for cancer.

On November 27, the NIH announced plans to launch a pilot program of the GRAIL test in mid-2021.

Over the course of the program, 165,000 people will receive the cancer blood test. Approximately 140,000 of the participants will be people ages 50 to 79 with no cancer symptoms, and they’ll each be screened once a year for three years.

The remaining 25,000 will be people with symptoms that could possibly be caused by cancer. They will submit samples for the cancer blood test while also undergoing standard diagnostic tests.

The cancer blood test was able to pinpoint a cancer’s source with 93% accuracy.

The NIH expects to have the results of the study in 2023, and if the test proves effective, a trial involving one million people could follow in 2024 and 2025. Eventually, the test could become a routine cancer screening tool, something doctors order during patients’ annual check-ups.

“Early detection, particularly for hard to treat conditions like ovarian and pancreatic cancer, has the potential to save many lives,” Simon Stevens, NHS England’s chief executive, said in a press release. “This promising blood test could therefore be a gamechanger in cancer care, helping thousands more people to get successful treatment.” 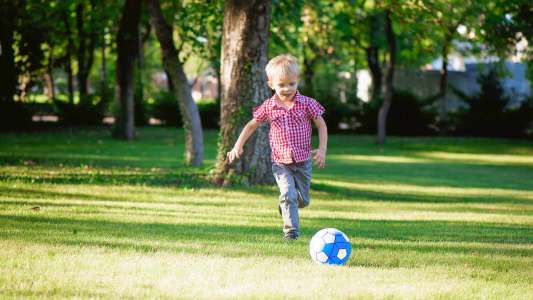 Adding a green space to an urban daycare’s playground can boost a child immune system after just 28 days.