Chemo hair loss can prove a mental and emotional burden to patients who are already in the fight of their lives.

During her first bout with breast cancer in 2019, it was difficult for Jennifer Bruck “to see no hair, no eyebrows, no eyelashes.”

“It just kind of makes you look like a completely different person,” she told Omaha’s ABC 7.

This past September, Bruck went in for a CT scan and was told that the cancer had returned. Now, facing stage 4 metastasized breast cancer, Bruck is ready to fight again … but this time, thanks to a special cooling cap, chemo hair loss may not be adding to her difficulties.

How it works: By circulating cooling water evenly around the scalp, the cap prevents hair loss, either by reducing the blood flow — and therefore chemo chemicals — the hair follicles receive, or slowing their growth and making them less of a target for chemotherapy, NPR reported in 2017.

Chemo can be effective — but brutal. It takes aim at fast-growing cells, and cancer cells grow fast. But so does hair.

Looking something like a puffy swim cap, Bruck’s system — made by Paxman — includes a custom cap for the patient, which is attached to a refrigeration unit that chills and circulates the coolants.

Patients must wear the cap for 30 minutes before chemotherapy begins, keep it on throughout the treatment, and wear it for up to 90 minutes after.

Why it matters: Chemotherapy can be effective — but brutal.

The drugs take aim at fast-growing cells, and cancer cells grow very fast. But those aren’t the only cells with speed; healthy, normal hair cells grow quickly too, making them a chemo target. Chemo hair loss can go beyond your head, as eyebrows, lashes, limb, and pubic hair may fall out too.

“Alopecia or hair loss is the universal sign of having cancer. You can’t really hide it,” Rachael Schmidt, of Nebraska Medicine’s Cancer Survivorship Program, told ABC 7.

It’s that signal that can make the cancer feel real, and can evoke emotions including embarrassment, anger, and fear.

And that psychological and emotional impact can take a toll. Researchers at South Korea’s Sungkyunkwan University School of Medicine found that breast cancer patients reported feeling negatively about their body image, with some suffering from depression tied to the hair loss.

“It is necessary to develop specific interventions to minimize distress due to alopecia for women with breast cancer,” the researchers concluded.

(To this day, my mother, who had breast cancer decades ago, tears up when describing running her fingers through her hair in the shower and coming away with clumps, or waking up to hair on her pillow, an irrevocable sign of the cancer and chemicals inside.)

Chill out, hair loss!: Previous studies of the Paxman cooling cap and another cooling system called DigniCap published in JAMA found that half of the breast cancer patients that used the caps lost less than half of their hair following four rounds of chemotherapy. (The DigniCap study used taxane; Paxman patients received taxane and anthracycline.)

These two studies provided stronger evidence for the benefit of cooling caps.

“These findings appear to represent a major step forward in improving the quality of life of individuals with cancer,” Dawn Hershman, who wrote a JAMA editorial that was published with the studies, told NPR.

Studies found that half of the breast cancer patients who used cooling caps lost less than half of their hair over four rounds of chemotherapy.

Cooling caps are approved for patients treating solid tumors, like breast, bowel, and prostate cancers, and it works better for some patients than others.

“Not everybody is a great candidate[,] some chemotherapies the efficacy is 25 percent for others it goes up to 100 percent,” Schmidt said. The cooling caps also come at an additional cost, and can run up to a couple thousand dollars.

For Bruck, the cooling cap so far has been a success. She’s suffered essentially no chemo hair loss, each hair a symbol of her strength as she takes cancer on again.

“You look in the mirror and you still see you.” 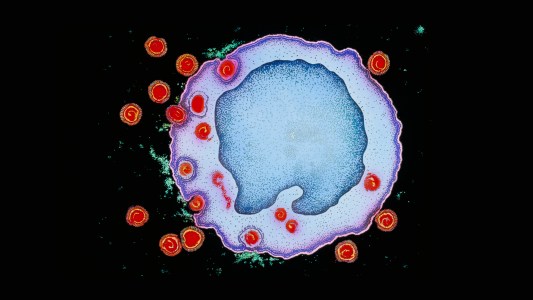 Excision BioTherapeutics is cleared to begin human trials of a CRISPR-based HIV treatment that’s administered in just one IV infusion.