The challenge: Chronic back pain — pain that lasts for at least 12 weeks — is incredibly common, affecting about 8% of Americans. The pain can impair a person’s ability to work, their quality of life, and their mental health, and it’s also a major burden on the economy.

If doctors can identify a cause for chronic back pain, such as an injury or a disease, they may be able to use surgery or targeted treatments to alleviate it.

“If the causes are in the brain, the solutions may be there, too.”

But about 85% of people with chronic back pain have what’s considered “primary” pain, meaning doctors haven’t been able to identify a specific cause for it — and without something specific to “treat,” sometimes all they can do is offer medications to mask the pain.

For significant pain, that can mean prescribing opioids, and because those drugs produce feelings of euphoria in addition to pain relief, they are risky and prone to abuse.

A new target: Recent research suggests that the reason doctors haven’t been able to find a cause for so many patients’ chronic back pain is because they’re looking in the wrong place — a patient may feel the pain in their back, but the cause of the pain is in their brain.

“This isn’t suggesting that your pain is not real or that it’s ‘all in your head’,” Tor Wager, senior author of the new pain relief study, told CU Boulder Today. “What it means is that if the causes are in the brain, the solutions may be there, too.”

Pain reprocessing therapy: One theory is that people with primary chronic back pain have certain neural networks in their brains that overreact to mild stimuli — a twist of the waist that might cause a twinge of pain in someone without this problem causes these folks agony.

Lead author Yoni Ashar compared this oversensitivity to having a “false alarm stuck in the ‘on’ position.”

Ashar and his colleagues have now tested a treatment designed to quiet the alarm. It’s called Pain Reprocessing Therapy (PRT), and it works by teaching a person with chronic back pain how to rewire their brains so that they don’t overreact to the pain stimuli.

“This treatment is based on the premise that the brain can generate pain in the absence of injury or after an injury has healed, and that people can unlearn that pain,” Ashar said.

The study: The study included about 150 people who’d had chronic back pain for at least six months at an intensity they rated as at least a four out of 10.

Participants in the treatment group underwent eight, one-hour long PRT sessions over the course of four weeks. During the session, they learned about the brain’s role in chronic pain and did exercises designed to help them rewire the hypersensitive circuits.

Ashar compared this oversensitivity to having a “false alarm stuck in the ‘on’ position.”

This might include doing things that usually cause a pain flare up — such as sitting down — and being asked to consider the sensations they feel, talk about their emotions, and reconsider their reaction to the pain.

“The idea is that by thinking about the pain as safe rather than threatening, patients can alter the brain networks [that are] reinforcing the pain, and neutralize it,” Ashar said.

The results: By the end of the study, 66% of people in the treatment group were pain-free or nearly pain-free. Most had maintained this relief at a one-year follow-up.

In the placebo group (where patients received a saline injection as the site of their chronic back pain), the rate at the end of the study was 20%, and in the no-treatment group, it was 10%.

Before and after the treatment, participants had their brains scanned while the researchers administered mild pain stimuli. In the PRT group, the parts of the brain linked to pain processing were “quieter” — that is, less active — after the treatment.

The next steps: PRT is still an experimental treatment, and more studies involving larger groups are needed before we’ll know for sure whether it could be an effective way to stop chronic back pain.

Still, this study suggests that the solution to chronic back pain may reside in the minds of patients and not their bodies.

“[It’s] a fundamentally new way to think about both the causes of chronic back pain for many people and the tools that are available to treat that pain,” co-author Sona Dimidjian said. 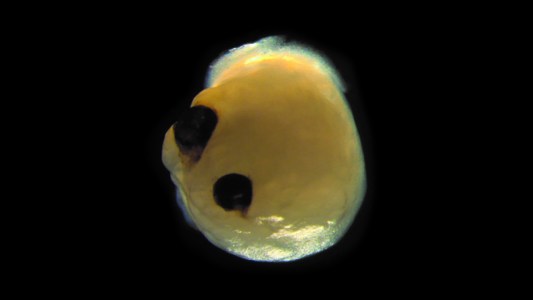 Researchers have grown mini brains with light-sensitive eye structures that could lead to breakthrough treatments for vision disorders.