It’s a popular panacea, flogged for sundry symptoms and conditions, and a multimillion-dollar market, but what cannabidiol — neon-scrawled in smoke shop window signs as CBD — is not is rigorously tested.

Although researchers have found evidence of CBD’s antibiotic action, and it is the active ingredient in the first marijuana-based drug approved by the FDA, studies on CBD for pain, a popular claim for the cannabinoid, are lacking.

Researchers at Syracuse University have administered the first experimental pain trial to assess CBD for pain.

The results, while a bit murky, point to both CBD and the expectation of CBD having an effect: not so much reducing the intensity of pain but making it more bearable. The ambiguous results  speak to the complexities of studying pain itself, which cuts across both the physical and mental/emotional.

“It’s not sunshine and rainbows pleasant”: Syracuse psychology researchers Martin De Vita and Stephen Maisto, along with doctoral candidate Dezarie Moskal, had previously done the first systematic review and meta-analysis of experiments testing cannabinoids like CBD for pain, according to Syracuse’s release.

In that study, the researchers found that cannabinoid drugs “may prevent the onset of pain by producing small increases in pain thresholds but may not reduce the intensity of experimental pain already being experienced.”

In other words, they may not be making it hurt less, but instead helping you tolerate pain better.

“It’s not sunshine and rainbows pleasant, but something slightly less bothersome,” De Vita said in the release.

The researchers were able to replicate that result in this study, De Vita said.

The protocol: For their new, experimental study of CBD for pain, the researchers took 15 subjects and gave them one of four randomly assigned scenarios, dubbed control, expectancy, drug, and drug+expectancy; each subject did all four.

Each participant was exposed to a special device that safely induces heat pain.

In their results, published in Experimental and Clinical Psychopharmacology, the researchers reported that “pain unpleasantness was significantly reduced” in all three scenarios compared to the control group that knew they were getting a placebo.

The researchers had hypothesized that the placebo effect would have the strongest impact, outpacing CBD itself.

“What we found though after measuring several different pain outcomes is that it’s actually a little bit of both,” De Vita said. Both the psychology and pharmacological aspects of CBD for pain seemed to increase tolerance.

“It was pretty remarkable and surprising.”

“That’s a fair question because we know that simply telling someone that a substance has the ability to relieve their pain can actually cause robust changes in their pain sensitivity,”  De Vita said.

Those four different experimental scenarios were the team’s way of trying to control for placebo effects.

Theoretically, the fact that pain tolerance improved in the group that was told they were getting a placebo (and so should have expected nothing) but actually got CBD should be evidence of the drug itself making a difference.

“The data is exciting but pretty complex in that different pain measures responded differently to the drug effect, to the expectancy, or both the drug and expectancy combined — so we’re still trying to figure out what is behind the differential data with different kinds of pain measures,” Maisto said.

Read: there’s nothing conclusive here yet. This is aside from the fact that each group had only 3-4 people in it — far from a robust sample size.

Measuring pain is, well, a pain: As New Atlas reports, further frosting the glass is a previous study out of Oxford that studied THC — the ingredient that gets you high, aka “the cool one” — and pain. In that 2012 study, the researchers used brain imaging to find out that THC doesn’t hit the brain region you’d expect a conventional painkiller to hit.

“Brain imaging shows little reduction in the brain regions that code for the sensation of pain, which is what we tend to see with drugs like opiates,” Oxford’s Michael Lee, the lead researcher, said in a release at the time.

“Instead cannabis appears to mainly affect the emotional reaction to pain in a highly variable way” — which sounds like it jogs with the Syracuse results for CBD.

According to Maisto, the next step is trying to figure out the underlying mechanisms that make CBD for pain seem to work, even without the CBD.

This speaks to a conundrum for pain researchers: studying it is, well, a pain. To that end, the Syracuse team has been developing different pain measurement protocols to “pop the hood” on the phenomenon.

“It’s not just pain, yes or no, but there are these other dimensions of pain, and it would be interesting to see which ones are being targeted,” De Vita said.

The team hypothesized the placebo effect to reign when it comes to CBD for pain, “but what we found out was way more complex than that and that’s exciting.” 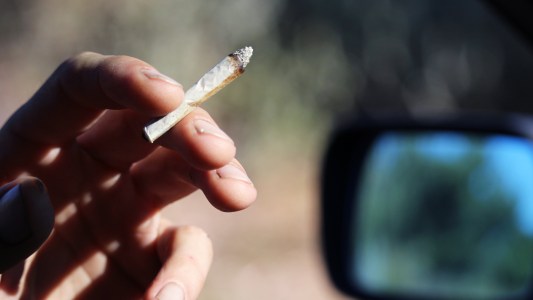 Some drug driving laws outlaw any amount of THC. To create better laws, researchers are trying to find out how long cannabis intoxication itself lasts.

Public Health
How long are you too high to drive? The science is fuzzy.
By B. David Zarley
Subscribe to Freethink for more great stories
Subscription Center
Sections
Video
Freethink
Subscribe
We focus on solutions: the smartest people, the biggest ideas, and the most ground breaking technology shaping our future.
Subscribe