For respiratory viruses like SARS-CoV-2, influenza, and RSV, the nasal passages serve as a beachhead for their infection, where they run up against the body’s frontline defenses.

Figuring out exactly how viruses break into our sneeze zone may help us develop nasal spray vaccines and other therapies. And the need for such therapies is acute: respiratory viruses are the most frequent cause of illness in the world, with a massive disease burden.

Now, new research out of Stanford and UC-San Francisco — published in the journal Cell — has mapped those invasion routes when it comes to the virus that causes COVID-19. The team believes their findings could potentially help develop a “morning after” spray that could help halt viral invasion after exposure, curbing both sickness and spread.

“Our upper airways are the launchpad not only for infection of our lungs but for transmission to others,” Peter Jackson, a professor of pathology, microbiology, and immunology at Stanford and co-senior author of the study, said.

Respiratory viruses are the most common cause of illness in the world. Understanding how they invade our nasal passages could help us prevent not only sickness, but spread.

Now you nose: The nasal passages are complex, filled with an array of cells and awash with microorganisms. Mucin proteins form a fence against invading microbes, and a slow moving conveyor belt of mucus sweeps any trapped pathogens away, protecting your precious lungs.

Jackson, co-senior author Raul Andino, a professor of microbiology and immunology at UCSF, and postdocs Chien-ting Wu and Ran Cheng of Stanford, and Peter Lidsky and Yinghong Xiao of UCSF, focused their attention on one particular type of nasal cell: multiciliated cells.

Specifically, they focused on two important structures that stick off of those cells: cilia and microvilli.

Cilia spring like garden eels from the outer surfaces of cells. According to Stanford, a single nasal epithelial cell could extend as many as 400 of these appendages through the mucus layer, all of them beating rhythmically to push the mucus along the nasal passage away from the lungs.

Microvilli are smaller projections, like little fingers that can grab and move around various cellular bits.

The researchers discovered that these two structures are the key to SARS-CoV-2’s invasion.

Mission: infection: The researchers used complex cultures of cells, called organoids, to simulate nasal passages in the lab. (While these contain cilia, microvilli, the mucin-mucus layer, and other important structures, they do not have blood flow or immune cells; they’re very good models, but not perfect.)

By exposing these cells to SARS-CoV-2 and using various forms of microscopy and staining, the team could tease out how SARS-CoV-2 makes its way into the cells, replicates inside them, and escapes to continue the infection.

They found that only the cells with cilia on them became infected. The virus initially glommed on to cilia by attaching to ACE2, its favorite target.

Once on the cilia, the virus uses them to make its way past the mucin-mucus barrier and into the cell. Jackson theorizes it may do this in two different ways — by hopscotching down the cilia from ACE2 to ACE2, or by entering the cilia itself, and riding it down like a “freight elevator.”

Either way, the end result is the same: infection.

“Once the virus gets through that barrier, it can replicate freely in underlying cells,” Jackson said.

Once it gets inside, the virus twists the microvilli to its own ends. It causes them to grow bigger and branch, from from less than half the size of cilia to potentially towering over them. Virus particles use the microvilli as a jumping off point, riding the mucus conveyor belt to new victims.

And they learned that it takes about 48 hours for the virus to truly establish its hold — a window for potentially stopping it.

A future therapy could be a nasal spray that would be akin to a “morning after” treatment aimed at these nose cell structures, used after suspected exposure.

Holding the line: Knowing how the virus gets in gives researchers more avenues for stopping it.

The team was able to find an enzyme inside the cells that was crucial to mutating the microvilli. Inhibiting those enzymes greatly reduced the virus’ spread — a potential therapy target.

“By studying how the COVID-19 virus gets into the airway and expands, we were able to find a key molecule that we could use to target and block that propagation that would stop the virus from not only getting into your body and having bad consequences, like mortality that people see, but would also block the spread of the virus to other people,” Jackson told San Francisco’s KRON.

Figuring out a way to temporarily hamstring cilia motion could also serve to slow down the virus’ march (although that would have downsides, too).

A future therapy could be a nasal spray that would be akin to a “morning after” treatment, used after suspected exposure to keep the virus in check while the immune system moves in to do its thing.

The techniques may work for other respiratory viruses as well, perhaps even novel ones; the team had similar results when infecting the cells with RSV and parainfluenza virus, meaning that a therapy that targets cilia and/or microvilli could be a potential pandemic speed bump. 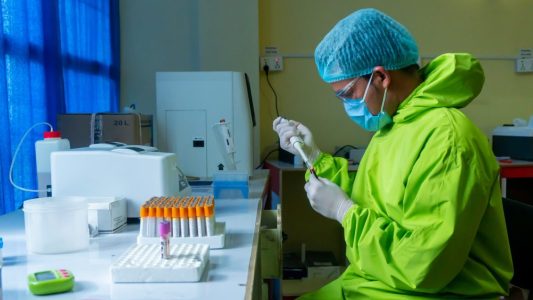 After a monumental year of breakthroughs, scientists, investors, and CEOs share which areas of biotech they are eagerly watching this year.

Inventions
5 biotech trends to watch in 2023
Subscribe to Freethink for more great stories
Subscription Center
Sections
Video
Freethink
Subscribe
We focus on solutions: the smartest people, the biggest ideas, and the most ground breaking technology shaping our future.
Subscribe