Doctors can learn a lot about a patient’s health just by looking at their skin. Red rash on their face? That’s a symptom of lupus. Blue lips? Might want to test them for heart disease.

But while learning about these clinical signs of disease during his second year of med school, 20-year-old student Malone Mukwende found himself repeatedly asking the same question:

“But what will it look like on darker skin?”

The problem was that his curriculum at St George’s Hospital Medical School often only showed pictures of what symptoms would look like on white skin. The language used to describe skin symptoms also defaulted to their appearance on white patients.

So Mukwende, collaborating with two of his school’s lecturers, decided to write a guidebook focused specifically on identifying and describing clinical signs on darker skin.

In “Mind the Gap: A Handbook of Clinical Signs in Black and Brown Skin,” readers will find side-by-side images of the same illness symptoms on white and darker skin.

In some cases, the difference between the two images can be profound — and doctors not knowing they exist could be potentially deadly for patients.

For example, the rare Kawasaki disease — recently found to be a complication of COVID-19 — causes a bright red rash on white skin. But on darker skin, it looks more “like goose bumps,” Mukwende told CBC Radio.

“If both those patients presented to a hospital, we can almost tell that, if there was not this knowledge, who would be getting sent home and who would be receiving treatment,” he said. “Consequently, it can mean that someone will end up dying because of that.”

This problem of missing clinical signs on darker skin isn’t just a hypothetical scenario, either.

In an opinion piece for STAT, dermatology specialist Art Papier describes seeing patients with darker skin suffer due to the same curriculum gap Mukwende hopes to address with his book.

“I’ve seen patients of color misdiagnosed because clinicians could not recognize their rashes,” he wrote. “I’ve seen immunologic diseases such as lupus, life-threatening drug reactions, and other conditions that manifest themselves on the skin get missed for the same reasons.”

Artificial intelligences designed to detect skin conditions are stumbling over the same pitfalls as their human counterparts — because they’re trained on image datasets that, like Mukwende’s textbooks, are dominated by white skin tones, they’re not as adept at spotting signs of disease on darker skin.

Mukwende and his co-authors are now in the process of finding a publisher for the book, but their effort to bridge the curriculum gap won’t end when it starts rolling off the presses.

Because they had such a hard time tracking down any photos of some conditions on darker skin, they’ve decided to launch a companion website for the book where people can send in photos themselves.

I want it to empower medical professionals.

The authors will include some of those images in future iterations of “Mind the Gap,” along with images and descriptions submitted by med students and healthcare workers.

The ultimate goal is for the book to be a “live document” that becomes more useful the longer it exists.

“My hope is that the handbook will become a staple resource in medical settings around the world,” Mukwende told the Washington Post. “I want it to empower medical professionals, so they feel more competent, and so patients can be confident that their doctors understand them.”

Education
“Personalized curriculums” could get kids to care about school again
Personalized learning has to potential to prepare learners who are self-regulating and self-motivated for life beyond school. 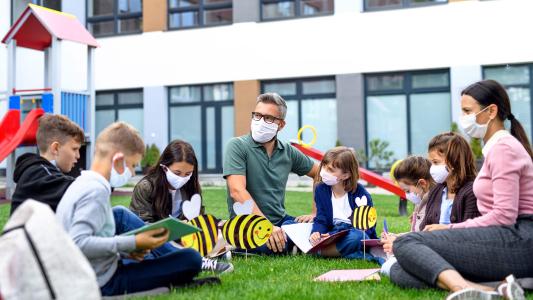 Transitioning to outdoor classrooms this fall could help stem the spread of COVID-19 in schools and protect students, according to researchers.

Coronavirus
The case for teaching students outside this fall
Subscribe to Freethink for more great stories
Subscription Center
Sections
Video
Freethink
Subscribe
We focus on solutions: the smartest people, the biggest ideas, and the most ground breaking technology shaping our future.
Subscribe