Eric Pevzner has been following infectious diseases since 2005 and has never seen anything like COVID-19. As the Chief of the CDC’s Epidemic Intelligence Service (EIS), Pevzner and a team of EIS officers — more aptly described as “Disease Detectives” — track down the mysterious spread of diseases hoping to stop outbreaks. But tracking coronavirus transmission was different.

“The biggest challenge is the unknown. It is when you have to go out and investigate an emerging pathogen. You don’t yet fully understand how to protect yourself from it. You don’t yet know how infectious it is. You don’t have a test for it, and you don’t have a treatment for it,” he says — a bull’s-eye description of COVID-19 when it first landed on American soil.

When the first case of coronavirus came to the U.S., the EIS and Washington State health department began investigating. Their goal was to understand its “attack rate” (also known as reproduction number or R0) and curb the spread by quarantining people before they had the opportunity to pass on the virus.

Like following a path of breadcrumbs, they trace the disease from person to person, trying to find everyone that was exposed. If they miss even one individual, there is a chance the virus could continue to spread.

The shoe-leather approach is called “contact tracing,” and tracking down everyone the ill person was in contact with is a daunting task in today’s connected world. The disease detectives look up flight manifests, get ticket sales from movie theaters, or look in visitor’s logs of eldercare facilities. Sometimes lists of possible contacts don’t exist — like when a person visits a grocery store or park. And sometimes business owners are reluctant to provide information because they are concerned employees or the public might learn there was a pathogen in their business.

Joseph Eisenberg, a University of Michigan epidemiologist who does not work for the EIS, says that contact tracing goes a long way to stop infections, especially with sexually transmitted diseases. With STDs, disease detectives know the very act that passes on the condition and precise measures to halt transmissions. Coronavirus transmission is not as straightforward. For an airborne virus like COVID-19, contact tracing “can be a very labor-intensive activity.”

Because coronavirus transmission can happen through casual contact, Eisenberg says that everyone around each person that could have been exposed should be tested or quarantined.

“Testing is important. If you aren’t testing a lot of people, you aren’t doing much,” he says. But testing for the coronavirus has been compromised. There simply aren’t enough supplies. Now, according to Eisenberg, anyone could be a carrier so the only way to stop coronavirus transmission is with universal social distancing.

Inside the Role of a Disease Detective

The demands on disease detectives are high right now, and health departments in Boston, San Francisco, and other places are training hundreds of new recruits — a crash course effort to scale up contact tracing exponentially.

But the nuanced techniques of an EIS officer can’t be learned from a textbook. Instead, skills are passed on like old traditions from one generation of detectives to the next, with new skills learned along the way. Each year the CDC recruits a diverse cohort of trainees to complete a month-long intensive course, followed by a two-year assignment. Most of their learning is on-the-job, under the guidance of a mentor. Pevzner completed his training as a disease detective in 2005.

Currently, Pevzner is working to understand how infectious the virus is within a household and to stop coronavirus transmission amongst family members living together. Currently deployed in Utah, Pevzner is collaborating with other EIS officers and the state’s epidemiologist. They’re visiting homes of people infected with the coronavirus.

“We’re coming in dressed in full PPE like they’ve never seen anywhere except in the movies, and they’re scared. They have a disease. They’re worried about their loved ones,” he says.

For Pevzner, working with families can be personal. In his current assignment, he got to know a family whose father was hospitalized with coronavirus. He had already been to their home and met both children when the mother called him to say her husband died in the hospital.

“They can’t mourn together because they all have to be isolated in different rooms in their home, because we’ve got two people now with the disease and one person who doesn’t have it. And I just can’t imagine experiencing that on my own. I’ll never forget moments like that,” he says. “I’m just so thankful that they’re willing to let us into their homes and that hopefully, we can get this information so we can stop anyone else from experiencing something like that.”

In Pevzner’s 15 years with the EIS, he has been to places like Mexico, West Africa, and Asia. He investigated Ebola, HIV, and tuberculosis — always with the same goal: Stop the spread. Stop the healthcare system from being overwhelmed. Flatten the curve.

Some diseases are impossible to trace, like when Pevzner was deployed to investigate a cluster of TB cases that were somehow linked to methamphetamine use. People with TB can be symptom-free for months or years before it goes from infection to disease. Thinking through all their past contacts is unfeasible. Yet missing one person could be the reason the disease spreads years later.

When a disease is so widespread that the chain of transmission because of web —  it isn’t possible to investigate every contact. More aggressive measures are needed — like social distancing. Pevzner was deployed to Mexico City to investigate the rapid spread of H1N1, a type of influenza that caused the 2009 pandemic. The city was shut down, which ultimately curbed widespread transmission.

Despite traveling the world, investigating many diseases, Pevzner says he will look back on COVID-19 and recall two things: the families he visited, and the EIS officers who took risks to learn about the virus.

“I’ll think about the total and complete disruption of our social fabric like I’ve never experienced in my career. I’ll think about how for the first time in my career — of all the other pathogens that I’ve worked on, that I’ve gone to places that were some really had places to work — I’ve always been able to come back home and feel safe in my home. I could be with my family and relax,” he says. “Right now, there’s no time to relax.” 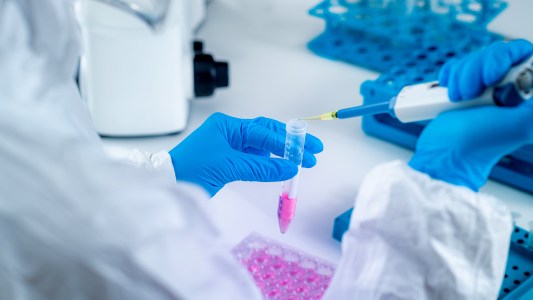 CanSino Bio’s Ad5-nCoV was the first Chinese coronavirus vaccine to be tested in humans. Now it’s the first in the world to enter Phase II trials.