Since January, hundreds of scientific teams and biotech companies have been developing and testing treatments for COVID-19.

Already, clinical trials have found several drugs that appear to help, lowering the risk of death, shortening hospital stays, or reducing the severity of the disease. But other once-promising COVID-19 treatments have fallen flat when tested on patients in controlled studies.

Here’s our latest, evidence-based coronavirus treatment update, including the options that appear to work, those that don’t, and the ones researchers still aren’t sure about.

The steroid had no benefit for patients with milder cases of COVID-19, but the researchers advised using dexamethasone to treat more severe cases.

The drug probably works by tamping down the immune system’s overreaction (called a cytokine storm), which kills many patients with severe COVID-19. But for patients with less advanced cases, there would be no benefit (and possibly some harm) from reducing their immune response, so the steroid should be used as a last resort.

A month later, the researchers published their peer-reviewed study on dexamethasone in the New England Journal of Medicine, which confirmed their early data. On September 2, a meta-analysis of clinical studies undertaken by the WHO and published in JAMA found an association between dexamethasone and lower mortality rates in patients with severe cases of COVID-19.

Researchers began testing the antiviral drug remdesivir on COVID-19 patients in February, encouraged by the drug’s efficacy against other coronaviruses in animal testing.

In April, several groups reported that patients given the drug showed signs of improvement and quicker recovery times.

On May 1, the FDA issued the drug’s maker — Gilead Sciences — an emergency use authorization for remdesivir as a potential coronavirus treatment. It followed that up on October 22 by making remdesivir its first approved treatment for COVID-19 (specifically, for hospitalized patients at least 12 years old).

Still, some studies — including a large WHO trial — have found no benefit of remdesivir for advanced cases of COVID-19. Because antiviral drugs work by slowing down the replication of the virus, they are more effective when given early on, before the body is overwhelmed with viruses.

As it stands, though, remdesivir is one of the most promising COVID-19 treatments available.

On November 9, the FDA granted an emergency use authorization for bamlanivimab as a treatment for high-risk COVID-19 patients ages 12 and up with mild-to-moderate cases. Then, on February 8, it authorized the combination treatment of bamlanivimab and etesevimab for mild to moderate cases of COVID-19 in people older than 12.

The path to authorization began on October 7, when Eli Lilly reported that, in a study involving more than 250 non-hospitalized COVID-19 patients, participants given both bamlanivimab and etesevimab were significantly less likely to be hospitalized and had significantly lower viral levels in their nasal swabs after 11 days than patients given a placebo.

Eli Lilly then announced the preliminary results of an NIH-assisted trial involving nearly 1,000 nursing home staff and residents on January 21. During that study, bamlanivimab reportedly prevented symptomatic infections in participants exposed to the coronavirus, but the data has yet to be peer-reviewed or published, and the trial is ongoing.

More good news came on March 10, when Eli Lilly announced the results of a phase 3 study involving nearly 800 high-risk patients over the age of 12 with mild to moderate COVID-19: the combination therapy reduce risk of COVID-19 related hospitalization or death by 87%.

As of March 2021, Eli Lilly’s goal was to manufacture 1 million doses of its antibody combination by the middle of the year.

Bamlanivimab and etesevimab isn’t the only COVID-19 antibody combo treatment under development — biotechnology firm Regeneron has created its own antibody cocktail: casirivimab and imdevimab (formerly known as REGN-COV2).

On November 21, the treatment received an EUA from the FDA, and doctors are now free to prescribe the combination of drugs to patients at least 12 years old with mild to moderate COVID-19.

On September 29, the company reported the results of a trial involving 275 non-hospitalized COVID-19 patients.

Compared to patients given a placebo, those in the active group had a quicker decrease in viral load and a faster alleviation of symptoms. The drug also had a particularly significant impact on patients whose own bodies failed to generate a strong antibody response to the coronavirus.

This suggests that the treatment “could provide a therapeutic substitute for the naturally-occurring immune response,” according to Regeneron President George D. Yancopoulos.

Too Soon to Say

One of the most unlikely potential COVID-19 treatments has been famotidine, the active ingredient in the over-the-counter heartburn drug Pepcid.

Early in the pandemic, reports began circulating in China that patients who took famotidine had better outcomes. Despite only anecdotal evidence, several groups launched clinical trials to test the drug.

So far, it seems famotidine doesn’t directly target the coronavirus, but it does appear to be connected to better patient outcomes.

More research is needed, though, before famotidine can be confirmed as an effective coronavirus treatment.

Developed by Fujifilm Toyama Chemical in 2014 as a flu treatment, favipiravir has gotten new life as a promising coronavirus treatment.

In March, Chinese officials reported that the drug was “clearly effective” in two clinical trials involving 320 COVID-19 patients — in one of the trials, it cut the average recovery time from 11 days to just four.

Several nations, including Russia, China, and India, have since approved the drug’s use as a COVID-19 treatment. It has yet to receive approval in the U.S., though, but as recently as August, new trials were still getting underway stateside.

As recently as mid-July, the rheumatoid arthritis medication tocilizumab (brand name Actemra) was looking like one of the more promising COVID-19 treatments — a retrospective study found that it appeared to decrease ventilated patients’ risk of death from COVID-19 by 45%.

But just two weeks later, drugmaker Roche announced the disappointing results of a late-stage clinical trial of tocilizumab, reporting that it failed to beat a placebo at improving hospitalized patients’ clinical status or reducing their chances of dying.

Tocilizumab did, however, appear to reduce the amount of time COVID-19 patients spent in the hospital — from an average of 28 days down to 20.

On October 20, JAMA Internal Medicine published three studies in which researchers gave the drug to COVID-19 patients with pneumonia. The first found that it may reduce mortality somewhat, the second that it had no benefit on disease progression, and the third that it might reduce a patient’s risk of death or needing ventilation.

A study published in February found that the drug didn’t significantly improve outcomes for people with severe COVID-19 pneumonia. It did, however, lead to shorter hospital stays and fewer days spent on ventilators.

Other trials of the arthritis drug are ongoing, so there is a chance it could still emerge as a useful coronavirus treatment.

Interferons are immune proteins that help fight infections by interfering with a virus’s ability to replicate. Studies have shown that they could be useful as a COVID-19 treatment — but the timing of the delivery is key.

If given soon after a patient contracts COVID-19, they appear capable of providing an immune boost that can speed up recovery.

But because one of the hallmarks of COVID-19 is its ability to cause a harmful overreaction of the immune system — a cytokine storm — a late delivery of interferons could make an illness worse.

Several studies of interferons are still ongoing — including one testing its ability to boost the benefits of remdesivir — so we’ll likely learn more about their utility as a COVID-19 treatment in the near future.

In lab studies, the malaria drug chloroquine showed promise in preventing and treating SARS infections, making it a solid candidate as a novel coronavirus treatment.

In March, the FDA granted chloroquine and its alternative formulation, hydroxychloroquine, emergency use authorizations, clearing doctors to prescribe both as COVID-19 treatments, often combined with zinc or the antibiotic azithromycin.

However, the drugs failed to live up to their promise during rigorous clinical testing, and the FDA revoked the authorizations on June 18.

Multiple studies around chloroquine have been corrected, withdrawn, criticized, or retracted, including two papers in the Lancet and NEJM that claimed the drug increased the risk of dying for COVID-19 patients.

Early reports from those trials were disappointing, though, and the ones that trickled in over the next few months were no better. In July, the WHO announced it was officially discontinuing the lopinavir/ritonavir arm of its massive SOLIDARITY trial.

On August 23, the FDA issued a controversial emergency use authorization for transfusions of blood plasma from coronavirus survivors — also known as convalescent plasma therapy — as a COVID-19 treatment, noting that 70,000 American patients had already received it.

The path to this began in April, when two studies in China found that patients with severe cases of COVID-19 benefited from convalescent plasma therapy. The theory behind the treatment is that survivors’ blood plasma has antibodies, which can help neutralize the virus in patients with active infections.

Since then, the preliminary results from studies has been mixed.

One study involving more than 35,000 patients reported that giving patients convalescent plasma within three days of diagnosis produced a statistically significant decrease in mortality compared to those given it four or more days after. However, that study has yet to be peer reviewed.

A smaller peer-reviewed study published in October 12, meanwhile, found that convalescent plasma had no effect on patients’ likelihood of getting worse or dying. However, 80% of the patients in that study already had their own coronavirus antibodies by the time they received the plasma, potentially rendering the treatment moot.

In January, the team behind a clinical trial in Argentina reported that convalescent plasma can prevent a severe infection in older COVID-19 patients if given within three days of symptoms appearing.

On January 15, the team behind the 10,000-person RECOVERY trial reported that it saw no convincing evidence that convalescent plasma helped hospitalized COVID-19 patients and would stop testing the treatment.

In March, the NIH halted a trial for the same reason: it found no evidence that the plasma helped patients.

We’d love to hear from you! If you know about a coronavirus treatment update we missed or if you have a tip for a future Freethink story, please email us at [email protected]. 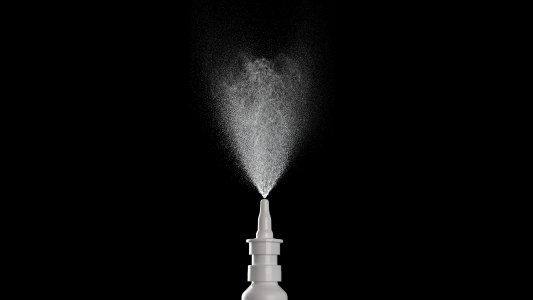 Scientists have developed a DIY coronavirus vaccine they think could provide protection against COVID-19 — and they’re testing it on themselves.