Flush from a $40 million series B round, biotech startup Ukko (named for the Finnish god of thunder, aka “Not-Thor”) is looking to use CRISPR gene editing — along with computational biology, protein engineering, and immunology techniques — to design foods that are both safe and delicious for those suffering from celiac disease and gluten sensitivities.

There’s plenty of gluten-free bread out there, but, for most people, it’s just not quite as good as its wheaty cousin.

“It’s never as crunchy on the outside, fluffy on the inside as regular bread,” Ukko founder and CEO Anat Binur told Fast Company.

Ukko’s model isn’t to make gluten-free alternatives “better” — it’s to eliminate the need for them at all.

Using an AI model, the company is identifying which proteins within gluten trigger problems in those with celiac disease. Then, using CRISPR Cas-9, they snip out those genes.

“The core of our approach is our AI-driven platform, which allows us to go to a protein at a component level and precisely engineer it in a way that keeps the good and gets rid of the bad,” Binur told Forbes.

Towards a Tastier World

According to the company’s website, Ukko is “building a comprehensive, clinically validated map of the molecular structure of food allergies and disorders, unlocking critical knowledge about the biological mechanisms that drive human food interactions.”

Then, using that map as a guide, they will attempt to engineer wheat products without the proteins that trigger a celiac autoimmune response, while keeping the traits that give wheat its flavorful, structural, and nutritional qualities.

“We will end up having a gluten that is functional and wonderful, but doesn’t trigger the immune system,” Binur told FastCo.

Estimates from the Celiac Disease Foundation peg the prevalence of the disease at a shade over 1% worldwide.

Celiac is differentiated from a general wheat allergy by its ability to damage the small intestine; celiac can cause a rash of issues, from, well, rashes to digestive problems — bloating, constipation — to muscle and joint aches and, in children, growth and development issues.

Non-celiac gluten sensitivity is also reported to cause nausea/vomiting, abdominal and joint pain, headaches, and brain fog, with varying levels of severity (although the diagnosis is controversial).

CRISPR’s potential for creating hypoallergenic food — and cats — has been on science’s radar for a few years now. As FastCo points out, researchers from the Netherlands and U.K. published a paper on the idea in BMC Plant Biology in 2019.

“Wheat varieties or accessions containing only safe gluten have not been identified and conventional breeding alone struggles to achieve such a goal,” the researchers wrote, due to challenges in wheat’s huge and complicated genetic structure.

Still, scientists are CRISPR-creeping closer to creating a fluffy, delicious pastry someone with celiac can eat without fear.

Cornell University’s Alliance For Science reported in 2018 that researchers would have to turn off 45 genes to make wheat safe for people with celiacs; by 2017, they’d already deactivated 35 of them.

Ukko’s plans extend beyond wheat; they’re also turning to computational biology, immunology, and protein engineering to develop therapeutics for peanut allergies, which can be severe — even fatal.

“One of the challenges is that right now we are using the regular peanut protein, so people have a lot of side effects because that is what they are allergic to,” University of North Carolina Medical school allergy specialist Onyinye Iweala (who has no affiliation with Ukko) told Forbes.

In an attempt to make the process safer, Ukko wants to use CRISPR to develop peanut proteins without some of the more dangerous molecules.

“It’s exciting that they are trying this approach. If we could take some of the specially synthesized hypoallergenic peanut protein and use that to get people to become tolerized to peanuts, we could minimize side effects,” Iweala said.

Corrections: A previous version of this article incorrectly stated that Ukko also planned to fix wheat allergies, as well as celiac disease and gluten sensitivities. This is not the case. It also stated that CRISPR would be used in their peanut protein work; this is not the case. The article was updated on 2/12/21, and the author regrets the errors. 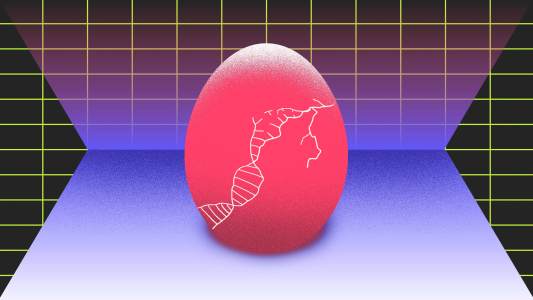 Base editing has proven useful for correcting disease-causing point mutations in animals — and now, human trials are on the horizon.

CRISPR
Base editing could cure a host of genetic diseases
Subscribe to Freethink for more great stories
Subscription Center
Sections
Video
Freethink
Subscribe
We focus on solutions: the smartest people, the biggest ideas, and the most ground breaking technology shaping our future.
Subscribe