A Scottish man is the first person in the world to undergo a double hand transplant to treat a rare autoimmune disease, called scleroderma, that had left his fingers painfully clenched into permanent fists.

The patient: Steven Gallagher developed a strange rash on his face and pain in his right arm about 13 years ago. He was incorrectly diagnosed with lupus and then carpal tunnel syndrome. He underwent surgery, but the pain returned — this time in both arms.

“The pain was horrendous. I was on so much pain relief it was unbelievable.”

Gallagher was referred to a specialist who diagnosed him with scleroderma, a rare autoimmune disease that causes scarring of the skin and internal organs. About seven years ago, the condition began causing the skin on his hands to tighten and his fingers started curling inward.

“It got to the point where it was basically two fists — my hands were unusable,” he told BBC News. “I couldn’t do a thing apart from lift things with two hands. I could not grab anything. It was a struggle to get dressed and things like that.”

“[The pain] was horrendous,” he added. “I was on so much pain relief it was unbelievable.”

Eventually, Gallagher was referred to Andrew Hart, a Glasgow-based consultant plastic and hand surgeon, who mentioned the possibility of a double hand transplant.

“[A]t the time I laughed and thought that’s space-age kind of things,” said Gallagher — but after talking with his wife Kerry about the surgery, he decided to pursue it.

“At the time I laughed and thought [of a double hand transplant] that’s space-age kind of things.”

Four weeks after the surgery, Gallagher was discharged from Leeds General Infirmary. He now visits hospitals in Glasgow twice a week for monitoring and for physical therapy, which is helping him regain hand function.

“Now, around five months after my double hand transplant, I can move my fingers and thumbs and also move my wrists,” he said. “I had so much more movement after just six weeks than I had before the operation, and my pain score has gone to zero.”

Looking ahead: As with any transplant, and especially something as major and complex as hands, there’s always a possibility that Gallagher’s body will reject his new hands at some point in the future. He’ll need to be on immunosuppressant drugs the rest of his life, too, increasing his risk of infections.

As he’s the first person with scleroderma to receive a double hand transplant, doctors also don’t know what impact the disease might have on his new hands — they plan to collect skin biopsies to monitor for disease biomarkers and will record any symptoms he notices.

Despite these challenges, Gallagher is optimistic about his future, telling BBC News he hopes he’ll eventually be able to start working again.

“[The surgery] has given me a new lease of life,” he said. “I’m still finding things hard just now, but things are getting better every week with the physio and the occupational therapists. Everything is just slowly getting better.”

Robotics
NASA is sending a robot surgeon to the ISS
A MIRA surgical robot is heading to the ISS in 2024 so developers can test its potential to help astronauts survive medical emergencies.
Up Next 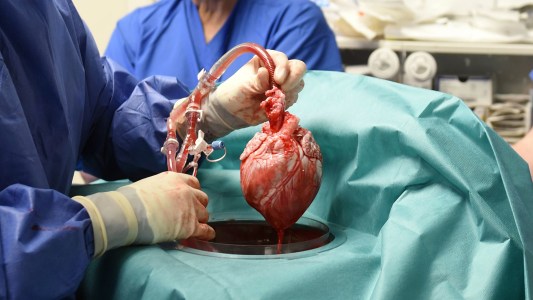 A pig virus — and not organ rejection — appears to be the reason a man who lived for two months after a pig heart transplant ultimately died.