A man who survived for two months after a pig heart transplant may have ultimately died because the heart was infected with a pig virus — not because his body rejected the organ, according to his surgeon.

The procedure: On January 7, 2022, surgeons at the University of Maryland Medical Center (UMMC) transplanted a heart from a genetically engineered pig into David Bennett, a 57-year-old handyman with life-threatening arrhythmia.

At first, the pig heart transplant appeared to be a success — the heart was pumping on its own within days, and just two weeks after the surgery, Bennett was working with physical therapists to regain his strength.

“The virus maybe was the actor, or could be the actor, that set this whole thing off.”

Unfortunately, on March 9, UMMC announced that Bennett’s condition had begun deteriorating several days prior and that he had died on March 8 after receiving compassionate palliative care.

“There was no obvious cause identified at the time of his death,” a UMMC spokeswoman told the New York Times.

The pig virus: On April 20, the American Society of Transplantation streamed a webinar featuring Bartley Griffith, Bennett’s transplant surgeon. During it, Griffith revealed that the heart used for Bennett’s surgery had been infected by a pig virus, porcine cytomegalovirus (CMV).

The human version of CMV is also a common cause of organ transplant failure.

“We are beginning to learn why [Bennett] passed on,” said Griffith, according to an MIT Technology Review report. “[The virus] maybe was the actor, or could be the actor, that set this whole thing off.”

Revivicor, the company that genetically engineered and raised the animal used for UMMC’s pig heart transplant, has yet to release a statement on the discovery of the virus in the donor organ.

Déjà vu: This isn’t the first time this particular pig virus has interfered with a cross-species heart transplant.

In 2020, German researchers reported finding it in some of the pig hearts they’d transplanted into baboons. Primates who’d received the infected hearts died within weeks, they wrote in their study, while those who received virus-free hearts sometimes lived for more than six months.

The good news is that the virus probably can be avoided if donor pigs are tested for the virus in deep tissue biopsies and not just in the snout (as it appears was the case with Bennett’s donor pig).

“It’s a latent virus and hard to detect,” Joachim Denner, leader of the German study, told MIT Tech Review. “But if you test the animal better, it will not happen. The virus can be detected and easily removed from pig populations.”

The bottom line: The biggest fear going into Bennett’s pig heart transplant was that his body would reject the new organ despite the genetic modifications designed to make it more compatible with the human immune system.

Griffith told the webinar audience that, based on a biopsy of the heart late in the experiment, it didn’t seem like rejection was an issue — meaning the hope that modified pig hearts will be able to help end the organ shortage is still very much alive.

“If this was an infection, we can likely prevent it in the future,” said Griffith. 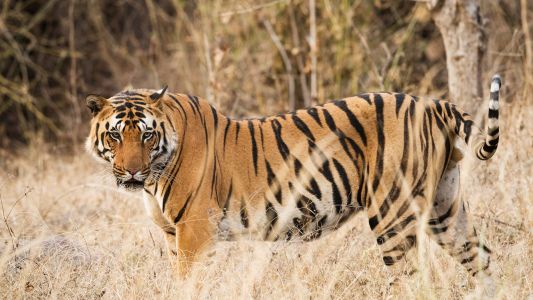 The global tiger population is finally increasing after more than a century of gradual decline, a new study from WWF reveals.

Animals
WWF report highlights tiger population gains for the Year of the Tiger
By Paige Bennett
Subscribe to Freethink for more great stories
Subscription Center
Sections
Video
Freethink
Subscribe
We focus on solutions: the smartest people, the biggest ideas, and the most ground breaking technology shaping our future.
Subscribe