Update, 3/9/22, 2:50 p.m. ET: The University of Maryland Medical Center has announced that David Bennett died on March 8. It did not give a cause of death, noting only that Bennett’s condition had been deteriorating for several days.

“We are devastated by the loss of Mr. Bennett. He proved to be a brave and noble patient who fought all the way to the end,” Bartley Griffith, who performed the transplant operation, said. “We extend our sincerest condolences to his family.”

A pig heart is now beating in the chest of a man in Maryland.

Three days later, his doctors announced that their patient was awake and breathing on his own — and the heart is pumping.

If Bennett continues to recover and thrive, more people could receive pig heart transplants in the future — helping bring an end to the organ shortage crisis that kills thousands of people every year.

The challenge: The number of people in need of donor organs vastly exceeds the number available, and as a result, 17 people die in the U.S. on transplant waiting lists every day.

Doctors have long looked to animal organs as a possible solution to this problem. Just like we raise animals for food, we could breed them for organs, ensuring no one has to die on a waiting list ever again.

Transplanting organs from one species to another is called “xenotransplantation,” and doctors have had some success with it in the past: in the 1960s, a person survived 9 months with a chimpanzee kidney, and in 1984, a baby survived 21 days with a baboon’s heart.

Doctors have also successfully transplanted heart valves from pigs and cows into humans, but no one has been able to make a whole animal organ work in a person for very long — typically, patients’ bodies reject the new organs almost immediately.

The pig heart: In an attempt to prevent this rejection, the regenerative medicine company Revivicor genetically modified the pig that would provide Bennett’s new heart.

Specifically, they “knocked out” three pig genes linked to the rejection of pig organs in humans, as well as a growth gene (so the organ wouldn’t grow any larger after transplant). They also inserted six human genes to help prevent the pig heart from being rejected by the human immune system.

Because Bennett didn’t qualify for a human heart transplant, the experimental pig heart was his last option, and the FDA approved his request to try it.

“It was either die or do this transplant,” he said the day prior to the surgery. “I want to live. I know it’s a shot in the dark, but it’s my last choice.”

Looking ahead: It’s too soon to outright declare Bennett’s transplant surgery a success — his body might still reject the pig heart.

While doctors will need to keep a close eye on his health in the weeks and months to come, so far, his body does appear to be accepting the pig heart as its own.

“It creates the pulse. It creates the pressure. It is his heart,” Bartley Griffith, who performed the operation, told the New York Times. “It’s working, and it looks normal. We are thrilled, but we don’t know what tomorrow will bring us. This has never been done before.”

The big picture: The advent of new gene-editing technologies, such as CRISPR, has been a huge boon to xenotransplantation research.

In 2020, China’s Qihan Biotech debuted a prototype pig with 13 genetic edits designed to prevent the human body from rejecting its organs — after successful lab tests with human cells, the company is now trialing kidneys from those pigs in non-human primates.

And in October 2021, NYU Langone Health surgeons successfully connected a kidney from a pig genetically modified by ​​Revivicor to the living body of a brain-dead patient.

“It was better than I think we even expected,” Robert Montgomery, leader of that surgical team, ​​ told the New York Times. “It just looked like any transplant I’ve ever done from a living donor. A lot of kidneys from deceased people don’t work right away, and take days or weeks to start. This worked immediately.”

“Many believed this breakthrough would be well into the future. I couldn’t be more proud to say the future is now.”

While these studies are all still experimental, the idea of animals becoming a life-saving source of donor organs has never seemed more possible than it does right now.

“While we have long been at the forefront of research driving progress toward the promise of xenotransplantation as a viable solution to the organ crisis, many believed this breakthrough would be well into the future,” he continued. “I couldn’t be more proud to say the future is now.” 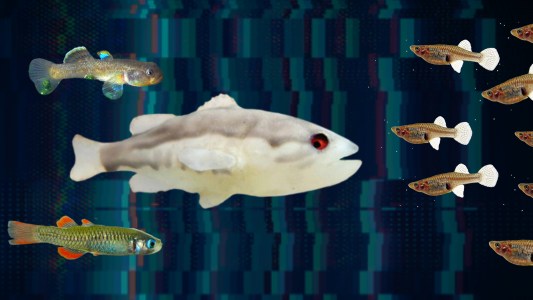 To fight an invasive fish threatening Australia’s critically endangered freshwater natives, researchers are looking to robotic predators — and the “ecology of fear” they create.

Animals
Using robotic fish to harness the “ecology of fear”
By B. David Zarley
Subscribe to Freethink for more great stories
Subscription Center
Sections
Video
Freethink
Subscribe
We focus on solutions: the smartest people, the biggest ideas, and the most ground breaking technology shaping our future.
Subscribe