Scientists briefly linked a pig’s kidney to a human body and watched it begin to function. This breakthrough experiment marks one step closer toward the goal of using animal organs for life-saving transplants.

What they did: Scientists are interested in animal-to-human transplants (xenotransplantation) to overcome the shortage of donor organs for human transplants. Pigs are a great option because they have organs comparable to humans. But, a particular sugar molecule found in pig cells, foreign to the human body, has been thwarting the effort: It makes humans immediately reject pig organs.

This time, the team from NYU Langone Health used a gene-edited pig organ. The pig’s genes had been changed such that its tissues no longer carried the problematic sugar molecule. The goal was that the human’s immune system would not reject the pig kidney.

And it worked — at least for a short time.

According to Reuters, the donor-recipient was a brain-dead person with signs of kidney dysfunction. Before the doctors took her off life support, her family agreed to the experiment. The team connected the pig kidney to the human body and watched it performe its normal function — making urine and filtering toxins in the bloodstream — for two hours. Then, they left the kidney connected for two days for continued observation.

“It had absolutely normal function,” Robert Montgomery, the doctor who led the surgical team last month at NYU Langone Health, told the Associated Press. “It didn’t have this immediate rejection that we have worried about.”

While the pig kidney was not actually implanted in the body, this is still a huge step. According to the New York Times, most problems with xenotransplantations occur when human blood begins to flow into the pig organ. Montogomery told the NYTs the fact that the organ functioned properly outside the body is a major step.

“It was better than I think we even expected,” he said. “It just looked like any transplant I’ve ever done from a living donor. A lot of kidneys from deceased people don’t work right away, and take days or weeks to start. This worked immediately.”

Of course, the long-term effects are still unknown — for example, organ rejections can still happen even when it’s been a long time since the transplant.

In short, it’s an ambitious goal with huge implications —and the results aren’t clear yet.

Why it matters: In the U.S., seventeen people die each day because they couldn’t get the organ transplant they needed. Most of them are on a waitlist for organs, spending as much as five years waiting.

The national transplant waiting list now has approximately 106,000 patients on it. The list is varied, with people of all ages, ethnicities, and genders represented. Last year, there were only 39,000 transplants. Simply put, there are not enough donors to meet the demand.

A long effort: Scientists have long been interested in xenotransplantation. In the early 1900s, doctors tried transplanting parts of rabbit kidneys or organs from lambs and pigs into humans.

More recently, in 1984, an infant girl, known as “Baby Fae,” was born with a defect in her heart. Doctors gave her a baboon heart and she lived for 21 days. The procedure also stirred a public response and raised ethical questions about animal rights.

After the short-lived success of Baby Fae and the subsequent adverse public reaction, scientists started looking to pigs instead. Pigs are raised for food, so these experiments raised fewer ethical questions. Eventually, scientists began experimenting with CRISPR and gene-edited pigs. United Therapeutics Corp’s Revivicor unit created the genetically engineered pig called GalSafe, used in this experiment. Last year the FDA approved it as a food for people with meat allergies, reports CNN Health.

With the recent experiments on nonhuman primates and the success of this study in a human body, trials in patients with end-stage renal failure could be possible. Some experts estimate we could be seeing cross-species transplants in a few years.

Amy Friedman, a former transplant surgeon and chief medical officer of LiveOnNY, a NY organ procurement organization told the NYTs, “This is really cutting-edge translational surgery and transplantation that is on the brink of being able to do it in living human beings.” 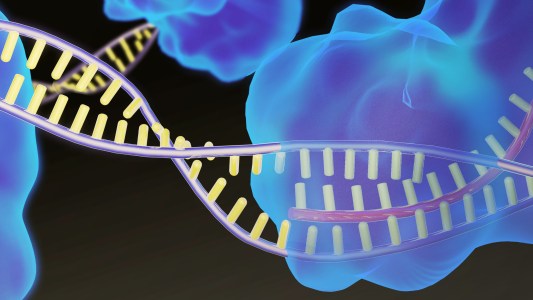 The origin story of CRISPR highlights how groundbreaking discoveries can emerge from run-of-the-mill research.

CRISPR
CRISPR is revolutionizing medicine — its origin story is pretty incredible, too
By Jonny Thomson
Subscribe to Freethink for more great stories
Subscription Center
Sections
Video
Freethink
Subscribe
We focus on solutions: the smartest people, the biggest ideas, and the most ground breaking technology shaping our future.
Subscribe