A Chicago lung cancer patient has successfully beaten the cancer via a rare double lung transplant.

Albert Khoury, a nonsmoker, was diagnosed with lung cancer in the early days of the COVID-19 pandemic, and his prognosis was terminal. But half a year on from his double lung transplant, the organs are working well, and there is no sign yet of the cancer returning.

A pandemic problem provides hope: Khoury originally thought he may have had COVID-19. The transit worker had back pain, chills, sneezing, and a cough in early 2020. While the mysterious new virus seemed a likely culprit, he sought out medical care after he began coughing up blood.

“They discovered stage 1 lung cancer, but due to the COVID-19 surge, I couldn’t begin treatment right away,” Khoury said. Left unchecked, the cancer was at stage 2 by July 2020, and despite beginning chemotherapy, it progressed to stage 4 — a deadly prognosis.

“Doctors at other health systems told me there was no chance for survival,” Khoury said.

But the same pandemic that dangerously delayed his treatment also provided a chance. Khoury’s sister had seen stories about double lung transplants for severely ill COVID-19 patients, like the kind being done at Northwestern.

At his sister’s encouragement, Khoury met with Northwestern oncologist Young Chae. Chae initially had Khoury on other treatments — no lung transplants, let alone a double lung transplant, had yet been performed on a cancer patient at Northwestern.

But as Khoury’s health continued to decline — eventually landing in the ICU, on a ventilator and suffering from sepsis and pneumonia — Chae began to consider a double lung transplant as an option.

Khoury’s sister encouraged him to look into double lung transplants like the kind saving COVID-19 patients.

“Both of Albert’s lungs were filled with cancer, and day by day his oxygen saturation was dropping. I left his hospital room and thought to myself, ‘could a lung transplant really be an option?’” Chae said.

After encountering Bharat, Northwestern’s chief of thoracic surgery, in the hall, the doctors decided to see if Khoury was a transplant candidate.

“They’ve never done it before because cancer usually spreads all over [the] body, bones, brain, stomach, and they don’t want to waste their lungs on the person that doesn’t have a chance to live,” Khoury said in a video provided to Newsy.

But luckily, Khoury’s advanced cancer had stayed contained to the lungs — a rarity for stage 4 cancer, Chae said.

Breath of hope: During Khoury’s seven hours on the table, the double lung transplant surgical team had to be extra careful to remove his cancer-covered lungs without letting any of the malignant cells escape into his body, where they could eventually metastasize.

And the fear of the cancer returning lasted beyond the surgery.

“One of the biggest fears of performing a transplant on anyone who has cancer is the risk of recurrence after the transplant,” Bharat said.

Transplant patients must suppress their immune systems to help prevent rejection of the new organs; if cancer cells have been left behind, with only a weakened immune system to stop them, they can come roaring back.

But six months in, Khoury is doing well, breathing fine and back to living his life.

The success of the double lung transplant in treating Khoury’s cancer has inspired Chae and Bharat to begin developing a protocol for future cancer patients, and they have begun a clinical registry to track cancer transplant patients’ outcomes.

The hope is that transplants could increasingly provide a shot at life for some patients who have exhausted their other options. 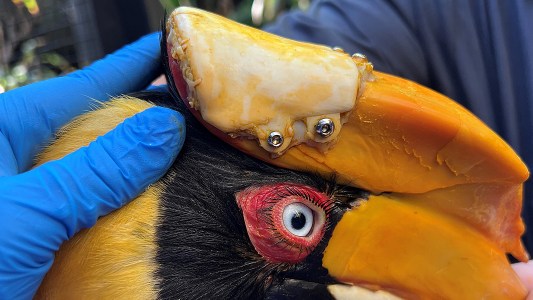 After removing part of a great hornbill bird’s casque, Florida veterinarians replaced it with a 3D-printed prosthetic.