When the pandemic began, there were no approved drugs to treat COVID-19, and developing ones from scratch would take time — time many patients didn’t have.

So, doctors started working with the drug they did have, prescribing approved medications off-label. That led to the discovery of the first life-saving coronavirus drug: a common steroid that had been on the market for decades.

Drug repurposing didn’t start with the pandemic, though.

Researchers are increasingly studying existing drugs, looking for effects that could treat other diseases. This is faster and cheaper than developing a new drug from scratch, but the outcome is the same: healthier patients.

Past examples of drug repurposing include aspirin, which started out as a pain reliever but is now used to prevent heart attacks, and Viagra, which is most commonly known as an erectile dysfunction med but can also treat a type of high blood pressure.

Now, researchers have made another potential breakthrough in drug repurposing: drugs developed to treat HIV may be able to treat an incurable, vision-impairing disease called dry macular degeneration.

Age-related macular degeneration is the most common cause of vision loss in people over the age of 50. It comes in two forms — “wet” and “dry” — and while the dry form is less serious, it’s also far more common, affecting more than 200 million people worldwide.

It can then progress to the point where their central vision is completely gone — they can still see things in their peripheral vision, but not what’s directly in their line of sight — and that can prevent them from being able to drive, read, work, and even live on their own.

There is currently no treatment or cure for dry macular degeneration, but now, an international team of scientists has published a study in the journal PNAS suggesting that a drug used to treat HIV might be able to help.

Some of the DNA in our cells contains instructions for making the proteins that power all of our bodily functions. But the vast majority of the DNA is junk.

“Junk DNA” is the term used to describe noncoding DNA — that is, the kind that doesn’t instruct our cells to make proteins — and only recently have researchers started to figure out what this DNA actually does.

In 2011, the team behind the PNAS paper discovered that the buildup of one type of junk DNA (called “Alu”) in cells around the retina contributes to dry macular degeneration. This buildup happens outside the cells’ nucleus, in an area called the cytoplasm.

Several diseases have been linked to the presence of DNA in the cytoplasm, so the researchers wondered if it might be possible to repurpose a drug for one of those diseases to treat dry macular degeneration.

One type of drug — Nucleoside Reverse Transcriptase Inhibitors (NRTIs) — caught their attention. Approved for use as an HIV treatment, the drugs are also known to prevent Alu DNA from replicating.

In 2014, the researchers tested NRTIs in mice with symptoms of macular degeneration and found that the drugs could effectively treat the animals — but, surprisingly, not because they affected Alu DNA, but because they blocked a group of proteins called the inflammasome.

For their most recent study, the researchers reviewed health insurance databases containing data on more than 100 million patients collected over two decades to see whether there was a link between NRTI use and dry macular degeneration in people.

From that review, they discovered that people taking the drugs were nearly 40% less likely to develop the vision-impairing disease than similar people not on the drugs.

Dry macular degeneration can cause a person to completely lose their central vision.

An observational study like this doesn’t prove causation, because people taking the drugs could be different in many ways that researchers can’t see or control for. But coupled with the mouse study, it looks very promising.

They’re now hoping to launch clinical trials to test the ability of NRTIs and their safer derivatives (called “Kamuvudines”) to treat dry macular degeneration — but they think the HIV drugs might be able to help treat other inflammasome-linked diseases, too.

“We believe Kamuvudines may be effective against a large number of prevalent degenerative diseases involving inflammasome activation, such as multiple sclerosis, Alzheimer’s, and type 2 diabetes,” researcher Jayakrishna Ambati said in a press release.

Because NRTIs have already gone through the development process once, it wouldn’t take as long — or as much money — to get them approved to treat dry macular degeneration in people, either.

“If we started a trial today, and NRTIs were effective in treating (age-related macular degeneration), they could be approved for use in as little as 2-3 years, for less than $10 million,” the researchers wrote in Fortune after their mouse study. 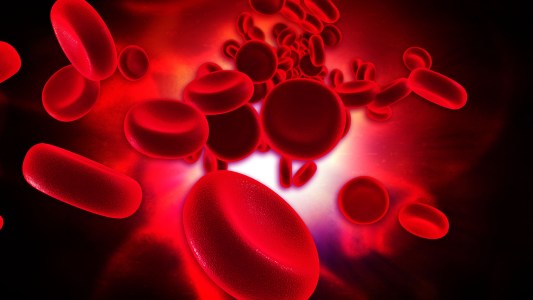