Most people don’t look at viruses and wonder how they might be helpful, not harmful, to humans — especially not now. But for 20 years, Anthony Van den Pol has done just that. He’s part of an ever-growing group of researchers studying viruses that can kill cancer cells while leaving healthy cells alone.

After sifting through 60 different viruses, Van den Pol, a professor of neurosurgery and psychiatry at Yale University, found a promising lead from an unlikely source: the Ebola virus. He discovered that a characteristic of some Ebola variants can actually help shrink the aggressive brain tumors known as glioblastomas — one of the deadliest viruses versus one of the deadliest cancers.

“Basically, we’re looking for viruses that can be used to destroy bad brain tumors, and glioblastoma is a particularly bad brain tumor,” he says. But, he admits, “at first glance using (Ebola) sounds a little weird.”

According to the WHO, Ebola’s average fatality rate is 50%, but in some cases it may kill up to 90%. If the Ebola virus were merely unleashed on a human brain tumor, it surely would spread out of control.

Instead, Van den Pol and his team have created what’s called a chimeric virus — in this case, a virus that’s a genetic combination of one useful piece of Ebola and another virus, called Vesicular stomatitis (VSV). (The term “chimeric” comes from the mythical Greek monster Chimera, which was cobbled together from a lion’s head, a goat’s body, and a snake’s tail.)

When inserted into a brain tumor, this lab-made virus can target human glioblastoma cells (embedded in mouse brains) without killing healthy cells outside of the tumor. The piece of Ebola virus that seems crucial for killing cancer cells while sparing healthy ones is a protein called a mucin-like domain (MLD) — ironically, it’s one of the same mechanisms that normally helps Ebola evade the human immune system and wreak havoc on the body.

A virus usually works by breaking into a healthy cell, using that cell’s tools to make copies of itself, and then killing the host cell. The virus copies then go on to infect other cells, and so on. Normally, healthy cells will alert the immune system of their infection, in an attempt to ward off the virus and halt further replication — so it’s to a virus’s benefit to thwart that.

The Ebola virus does this by releasing MLD from its host cell soon after breaking in, which confuses the immune system and lets the virus get to work replicating itself — essentially, MLD functions as a decoy.

“The immune system starts going after these proteins that are just floating around and really don’t do very much,” says Van den Pol. “That gives the virus itself a greater opportunity to infect and replicate.”

Either way, because it disrupts the immune system, you wouldn’t think that a decoy like MLD would help. Van den Pol, whose experiments centered on a few different VSV-Ebola combinations, expected that the most successful chimeric virus would be the one that did not contain MLD.

But the opposite turned out to be true. In mice, the MLD chimeric virus was best at shrinking tumors, prolonging survival, and leaving healthy cells intact. Van den Pol’s hypothesis comes down to the size of the lab-made virus: tacking on the MLD component makes a virus quite large, and that means it takes a while to replicate inside a cell, healthy or cancerous. Just like making a photocopy, the larger the original document, the longer you’ll be waiting for the copy to print.

“Normally, the MLD is there to confuse the immune system. In this case, we think why it’s beneficial is it’s slowing everything down,” says Van den Pol.

While the VSV component allows the virus to rapidly break into cells, the MLD part — now on its own, without the rest of the deadly Ebola virus — just slows down the replication process inside the cell. This buys healthy, noncancerous cells extra time to protect themselves and mount an antiviral immune response, but it leaves cancer cells — whose Achilles heel is that they are often unable to mount an immune response — overwhelmed.

A mouse model alone wouldn’t usually be worth writing home about, but parallel research into the human implications of this chimeric virus make it more intriguing. The VSV-Ebola chimera underpins Merck’s new Ebola vaccine, Ervebo, which the FDA approved late last year and that has already been injected in 260,000 people. That shows that, in another application, this chimeric virus is safe in humans.

Research into cancer-killing viruses more generally is gaining momentum, which bodes well for this particular research. In 2015, after decades of dead-ends, the FDA finally approved a modified herpesvirus to treat melanoma — the first FDA-approved treatment of its type. And in 2019, the FDA conferred “breakthrough” status to a poliovirus therapy being developed to treat brain tumors.

Van den Pol says, of course, that even though these wins in adjacent areas of research are cause for optimism, what’s next needs to be human clinical trials. But any next steps are currently being thwarted by a different virus.

Van den Pol says that COVID-19 has caused the closure of many labs at Yale. His remains open, though with a significantly reduced staff: only one person is allowed in the lab at a time.

“We try to respect social distancing because I think that’s an important way to avoid this coronavirus,” he says. “At the same time, some of the things we’re doing we think ultimately benefit human health, but we’re going a lot more slowly than we did before.” 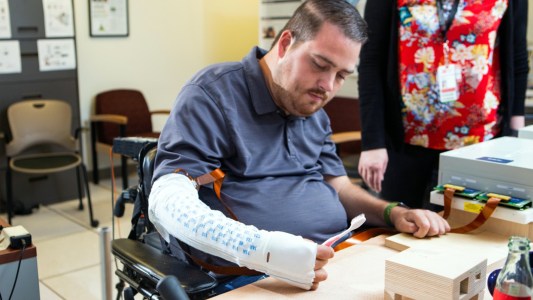 Researchers have used a brain implant to help a man with paralysis both move his arm again and regain a sense of touch.